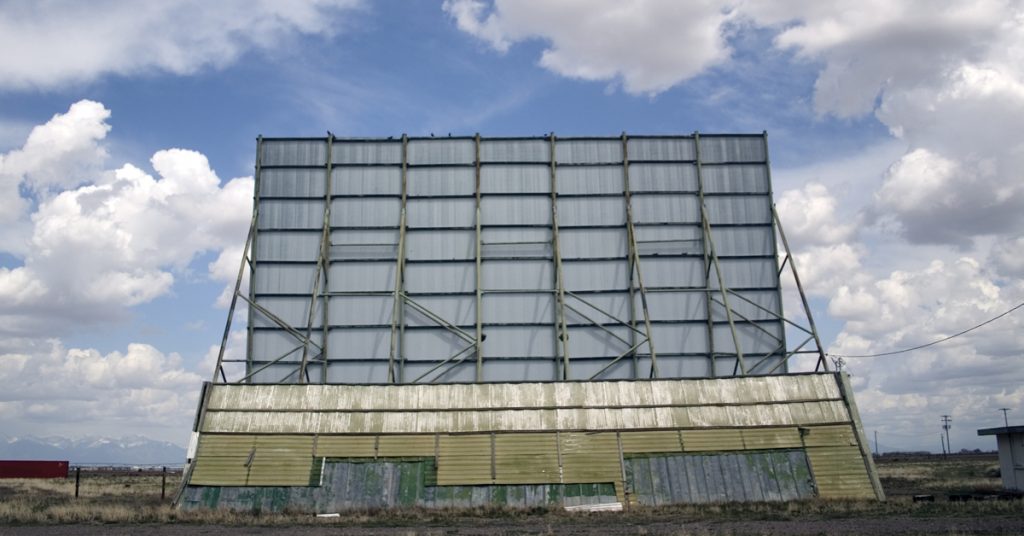 When Richard Hollingshead opened the first drive-in movie theatre in Camden, N.J. in 1933, he brilliantly braided together two prominent elements of American culture: the automobile and the Hollywood movie.

Combining two things that are fine by themselves doesn’t always succeed (think nuts and gum), but putting movies together with sitting in your car reflects a stroke of genius right up there with the root beer float.

Hollingshead had another stroke of genius when he came up with his slogan for the drive-in movie theatre: “The whole family is welcome, regardless of how noisy the children are.”

That tagline captured the essence of the experience: you could watch the movie in company with hundreds of other people parked in cars in a field on the outskirts of town, but at the same time you could enjoy the relative privacy of your own car.

I remember going to the Sunset Drive-In as a child in Helena, Mont., with my parents, who would fold down the back seats of our station wagon and have sleeping bags and pillows laid out for us.

My dad would clean the windshield with Windex and newspapers before we left the house, and even though my mom would bring a picnic basket full of snacks, we’d still walk down to the concession stand to get popcorn in a paper bucket the size of a milk pail, the salty kernels swimming in butter.

I remember seeing Jaws (1975) when it first came out at Helena’s other drive-in, The Sky-Hi Drive-In, as well as Serpico (1973), which was R-rated. When the actors unleashed a torrent of foul language, my mother would reach over the seat and try to cover my ears, which would have been awkward at the regular theatre of course, and when there was violence or nudity, my parents could censor it for us kids by making us cover our heads with our pillows.

And if we got bored by the big screen, we could always run around through the aisles of parked cars, to go play with other kids at the playground situated right in the front, beneath the huge, towering screen.

Twenty years after that first drive-in opened in New Jersey in 1933, the U.S. was home to almost 5,000 drive-ins in the 1950s. Today, fewer than 350 survive, and Montana has only two: one is outside of Butte, the other in Billings. One of the country’s longest-running drive-ins happened to be the Westernaire in Lewistown, Mont., which operated continuously for 64 years, from 1944 to 2008. Drive-ins slowly declined around the country starting in the 1960s, and by 1980, less than half remained (2400) since the height of their popularity in the late 50s.

Most historians point to the advent of the VCR in the 1980s as the critical factor in that decline, along with the climbing value of real estate on the edges of towns, thanks to the proliferation of box stores (A Walmart now sits on the site that once held the Ski-Hi in Helena).

But a website devoted to drive-in theatre history (driveinmovie.com) identifies an often-overlooked culprit: in 1966 the US Congress passed the Uniform Time Act, more commonly known as Daylight Savings, which meant that in the summer, many drive-ins couldn’t start the films until after 10 PM, a change that undercut one of the original features of the concept—namely, that watching a film in a car gave families with young kids a workable entertainment option.

Just south of Butte, off exit 119 on I-15, sits The Silver Bow Drive-In, which happens to be the first Montana drive-in to sport twin screens. The Hansen family has operated it since it first opened in 1977. The Silverbow has a 500-car capacity and shows two features (one on each screen), seven nights a week during the season. Though the screen was erected in 1977, the concessions stand and projection booth started out in Deer Lodge, which boasted its own drive-in from 1949-1973.

Like for the Silver Bow Drive-In, parts of the Billings’s Amusement Park Drive-In were relocated from an older outdoor theater. The owner of the Amusement Park said the large screen came from the Park Drive-in Cody, Wyo., (1946-2003).

Instead of having two screens, the Amusement Park shows films on each side of the single screen. Other quirky elements give this drive-in its special character: one projection booth is housed in an old railroad train caboose, the other in a 1938 truck that used to belong to the Billings Gazette.

True to its name, the Amusement Park Drive-in offers more than movies “under the stars.” It also features an amusement park with carnival rides.

Though the drive-in movie experience has largely vanished from the American horizon, Montana is fortunate to have a couple of outdoor theatres still thriving.

Next time you’re trying to figure out how to keep the grandkids entertained, consider making the trek to a drive-in to watch a movie on the really big screen from the comfort of your car, just like the old days.