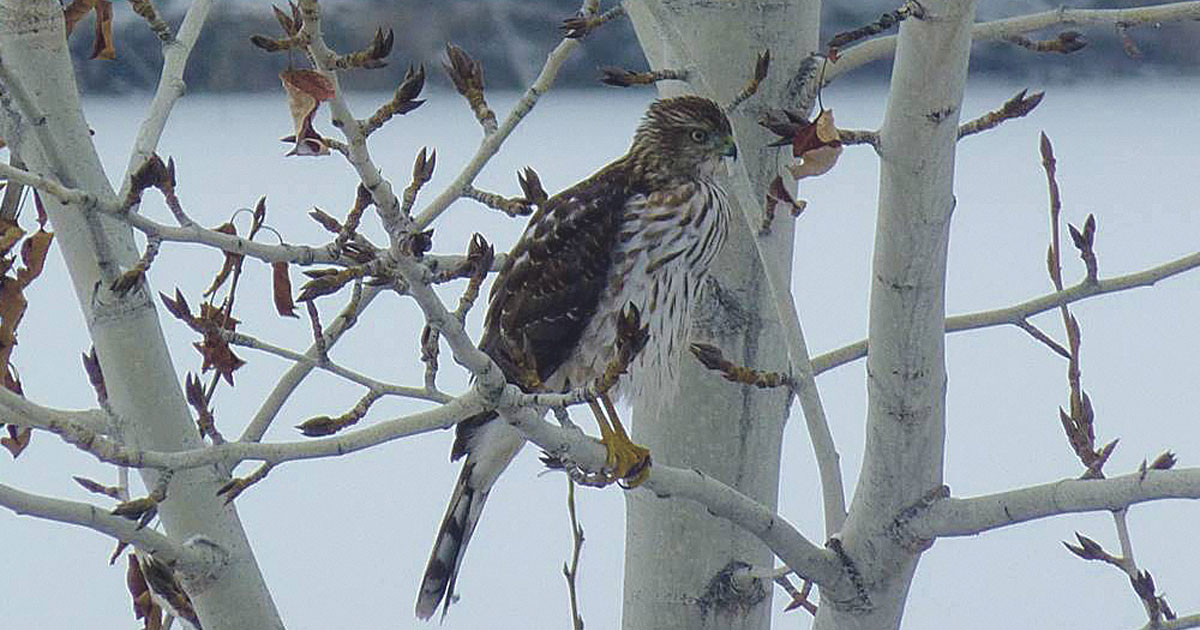 We see them every day. Small brown and black darts, zipping among shrubs, looking for berries or tasty insects. Or in great gray flocks, plowing the sky in giant wedges that land and graze, sheep-like, on rich, green fields.

If we’re lucky, we hear them every day, too, rat-a-tat-tatting on old growth Douglas fir or mournfully hooting in the dark nights of December. They are hoping to attract a mate or “cronking” as they glide like some modern-day pterodactyl onto ponds and streams.

Without birds, our world would be an impoverished place. And today, while some species have healthy populations, others are struggling. That’s where you come in: as a citizen scientist, February 16-19.

The Great Backyard Bird Count is in its 21st year, and singles, couples, families, friends, beginning birders, and experts are all invited to participate. Co-sponsored by the National Audubon Society and the Cornell Laboratory of Ornithology, citizen-collected data helps develop an accurate picture of bird health across our nation and the world.

This data helps scientists know what species need conservation efforts to keep them healthy and which ones are rebounding after habitat improvement efforts.

Participants in the GBBC are asked to give at least 15 minutes to the count, but more time is encouraged. You don’t need a backyard to join in. Visit a wildlife refuge near you, take a walk in a park or a hike in a national forest, or simply take a walk around your neighborhood.

When the last passenger pigeon was seen in our country, citizens had no concrete way to help professional ornithologists monitor bird populations. Today, with technology like apps for cell phones and events like the GBBC, citizens can help inform scientists.

An easy way to participate is to download the free e-Bird app for iPhones and Androids. This app helps you keep tabs of what birds you have seen and where, and it’s handy to have all year long. You can find a link to the download on the GBBC website, birdcount.org.

During the GBBC, the website posts real-time maps and charts of where other birders are reporting from and what species they see. It also has an “Explore a Region” link that tells you what birds to expect to see in your area. Directions for filling out your checklists are online as well. You use a new checklist for every day and a new checklist for each new location, even if it’s on the same day.

Last year’s data indicated some species were arriving in their northern habitats much earlier than in years past. It was also noted some species are moving farther north than they ever have before or appearing in places where they aren’t normally found.

Scientists speculate these changes in migration patterns may be the first indication of climate change requiring adaptations on the part of some bird species.

But don’t limit your bird watching to just one weekend a year. Look up the Intermountain Bird Observatory on your computer’s search engine, and you’ll find additional ways to be a citizen scientist.

Jessica Pollock, research biologist at IBO, says three program options engage a wide variety of people, some as volunteers helping with research and others simply observing what activities scientists and volunteers are doing. Conducting research and enhancing bird conservation as well as educating and engaging the community are the two guiding principles of IBO.

The IBO’s popular hummingbird banding sessions, running from May through August, take place at a private residence in Idaho City. Registration is free, but you need to register in advance by calling the IBO office. It’s a great way for visitors to Idaho, as well as residents, to learn more about these fascinating birds.

“We had over 500 people take part in or observe the hummingbird banding program last summer,” Pollock said, “which is why people need to reserve a spot.”

People can simply watch the bird banding, or, with training, they can take data or release birds from mist nets. Only biologists are allowed to actually band a bird.

“This is a great opportunity for anyone with mobility issues,” said Pollock. “They can walk about 10 steps and sit on a patio to watch the hummingbirds being caught, banded, and released. You can even hold a hummingbird in your hand and feel its heart beating!”

Another program is the songbird banding, which takes place from mid-summer to mid-October along the Boise River and at a new location at the intersection of Hwy 20 and Warm Springs Avenue in Boise.

“Both of these places are easy to get to for anyone with mobility issues,” said Pollock.

Owl and hawk banding are two other wildly popular IBO programs. These take place on Lucky Peak, reached by a road not for the faint of heart in the foothills near Boise.

“It’s a pretty gnarly road,” agreed Pollock, “ but we have lots of people who come for the banding, so it just depends on what you are comfortable driving.”

Raptor banding takes place daily on Lucky Peak from August 28 until the end of October. According to Pollock, 1,500 people showed up for raptor banding last year. No reservations are required.

Like so many scientific endeavors, IBO runs on grant money, meaning scientists donate a lot of their time to get the data they need to plan conservation measures. While there is never a charge for any of these programs, donations are gratefully accepted.

I’m lucky. Our home is bordered by national forest on one side and open pasture land on the other. This means that birds that need thick timber, like Great Grey Owls, hang out in our woods while the open, dry pastureland hosts a vast array of raptors, ravens, and upland game birds, like chukar.

In the spring, migratory songbirds come through on their way to northern breeding grounds, but in February, I can count on the raptors and owls to fill my GBBC checklists.

I’ve already invited three neighbors to join me for that weekend of birding: we’re going to turn our bird-a-thon into a roving party, going from our mountain ranch down to the Salmon River. After all, the GBBC is free, it’s easy, and it’s a great way to enjoy the great outdoors! Next summer, the three of us are headed to Lucky Peak and Idaho City to take part in our continuing engagement as citizen scientists!

The Montana chapter of the Audubon Society is planning a family-friendly Great Backyard Bird Count event on February 18.  More information is available on www.mtaudubon.org/center/upcoming-programs-events/