Wit and Wisdom of Yogi Berra 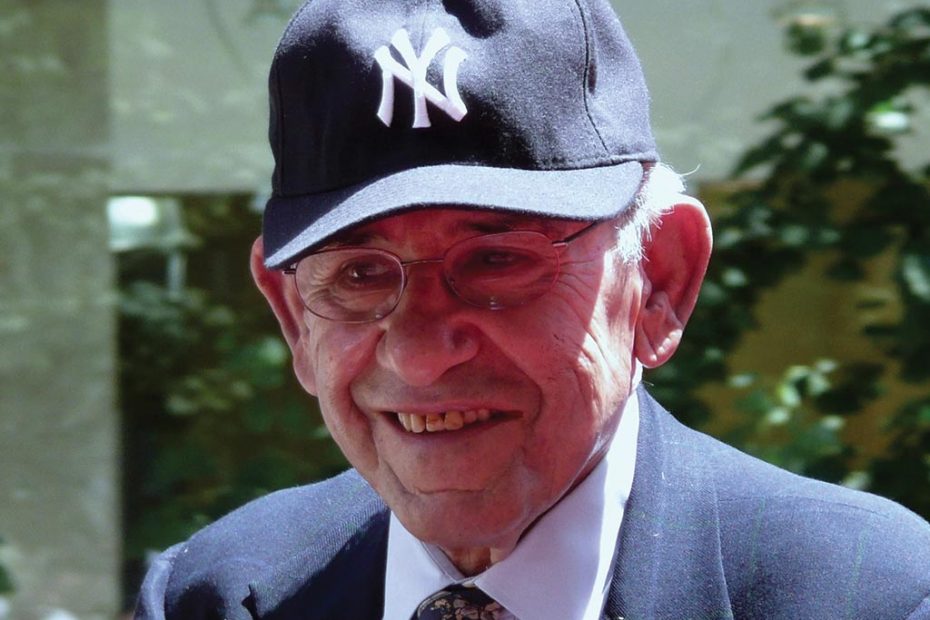 After the inimitable Johnny Bench, Lawrence Peter “Yogi” Berra (May 12, 1925-September 22, 2015) was probably the greatest catcher in the history of baseball. But he was also something of an inadvertent philosopher, uttering many expressions that didn’t quite make sense, but which have become etched into America’s cultural memory.

The Yankees signed Berra in 1943, but he didn’t take the field until 1946 for a very good reason: he was busy fighting in World War Two as a Navy Gunner’s Mate, earning a Purple Heart at Normandy.

He also holds the record for being on the most World Series-winning teams: 10.

He was the catcher for Don Larsen, who in 1956 threw the only perfect game in a World Series.

Yogi went on to be a manager for several teams, including the Mets, and was elected to the Baseball Hall of Fame in 1972.

As famous for the things he said as for his prowess on the baseball diamond, Berra’s pithy gems have become household knowledge across America, referred to now by historians and critics as “Yogi-isms.”

Even though his statements often seemed nonsensical or boneheaded, they often conveyed a deeper wisdom that made them stick.

Without meaning to, Berra became a philosopher. Perhaps the best example of this is something he said as manager of the Mets, who in 1973 were more than nine games behind the Cubs in the National League East. When a reporter asked what he thought his team’s chances were, Yogi growled, “It ain’t over ’til it’s over!”

The more you think about that, the more you realize how deep Berra’s insight was in an unguarded moment, and how easily he captured the heart of true sportsmanship: you never give up until the game is over.

Some of his other utterances were more funny than insightful: “Ninety percent of baseball is mental. The other half is physical;” “You can observe a lot by watching;” “It’s déjà vu all over again;” or “A nickel ain’t worth a dime anymore.”

Beneath the humor, you can’t deny he got to the heart of the matter. “A nickel ain’t worth a dime anymore” somehow captures the essence of inflation, for example, better than an economics textbook ever could.

Once, when asked why he no longer frequented a popular St. Louis restaurant he had been fond of, he famously explained, “Nobody goes there anymore. It’s too crowded.” Another time, while giving directions to a friend’s house, he let go this zinger: “When you come to a fork in the road, take it.”

Again, what at first sounds silly turns out to be a simple formula for what to do when opportunity knocks.

When he said, “Always go to other people’s funerals, otherwise they won’t go to yours,” he nailed the essence of “paying respects” and “paying it forward” in a simple, memorable, and hilarious aphorism.

His way with words became something everyone who interviewed him asked about, to which he eventually pointed out in all seriousness, “I really didn’t say everything I said.”

Meaning, of course, that even the stuff of legends eventually becomes more myth than reality, and sometimes things get taken out of context.

He inspired a character on the Huckleberry Hound TV show in the 1950s, Yogi Bear, who talked (and dressed) like Ralph Kramden on the Honeymooners.

But the resemblance between the character’s name and the fact that Yogi Berra was a household name in 1958 when the cartoon bear made his first appearance, Berra sued show creator Hanna-Barbera. He later dropped the suit, however, when the cartoon company argued that the similarity in names was pure coincidence.

No one really bought that argument, probably least of all Berra, but well in keeping with his reputation as a genial fellow, he let the matter drop. Or maybe it was because he understood that “I didn’t really say everything I said” had some relevance to trademarks and copyrights. MSN