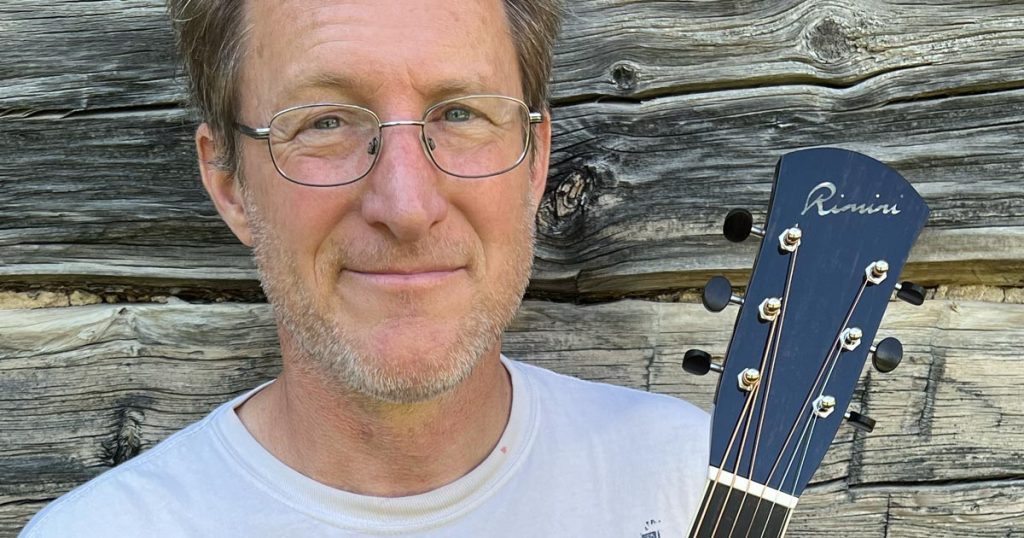 Until very recently, you had to drive 20 of those minutes up a dirt road until you reached the base of Red Mountain, where the remnants of what was once a booming mining town still line the road. Rimini was at one time so productive, the Northern Pacific railroad ran a spur line up to collect its ores.

Maynard started buying the old ramshackle buildings in the ghost town back in the 1980s and refurbishing them to house his various projects. He keeps his library and art studio in one, rebuilds old motorbikes and cars in another, and in what used to be either a post office or a brothel (no one left living is sure), he’s made a workshop for building some of the finest guitars ever made in the state.

He calls his shop Ghost Town Guitars, and he fittingly calls his signature deep-body, double-0 guitar the “Rimini,” the name inlaid in abalone on the headstock. He started his company in 2020, after apprenticing with one of the best-known luthiers in Montana—Dan Roberts of Roberts Stringwork—for more than a decade.

“For 10 years I made the daily commute to Townsend and then Belgrade to learn from Dan,” Maynard says. Roberts had worked for both Flatiron Mandolins (eventually purchased by Gibson) and for Santa Cruz Guitars, one of the premier companies for high-end instruments.

Maynard got into luthiery while visiting Dan’s shop with a friend who needed a guitar repaired. While they were discussing the repair job, Phil wandered around the shop, realizing he’d found his calling. He’d been playing guitar for a few years without great success when he realized what he really wanted was to make guitars.

“To tell the truth” he said, “I wasn’t having much luck with becoming a wizard guitar player, but I have always been a good student and good with my hands, so I knew I could learn how to make guitars.”

While still an apprentice, Phil made a dozen custom guitars, developing and perfecting his own, unique style. Currently under production at Ghost Town Guitars are examples of the three distinct models he’s focused on—the Rimini Jumbo Cutaway, the R1 Parlor Guitar, and the classic Rimini Deep Body 00, featured in a video at Music Villa’s Acoustic Letter.

When I visited his shop, he handed me a finished guitar, along with a flatpick, and urged me to play something. After my first strum, I was instantly struck by the even tone he had achieved. The bass (low strings) and the treble (high strings) were perfectly balanced, which is rare in all but the best guitars.

The tone itself was woody and clean—the perfect combination for bluegrass. I played a few old fiddle tunes, marveling at every feature of the instrument, from its sleek finish to its smooth neck, and a fingerboard offering effortless glide.

No doubt the years of study with a master craftsman in the guitar industry honed his skill and technique, but years of working in other fields has contributed to his success. He brings the same careful precision and balance to everything he undertakes, whether it is restoring an old sheepherder’s wagon in vintage detail, or resurrecting a rare Minx automobile from the ashes of rust. Maynard says “he’s good with his hands,” and the evidence surrounds him in the quaint remnants of a ghost town he’s helped return to vibrance.

Like many of the skills he has cultivated, from oil painting to top-notch automobile body work, making an instrument from raw wood is equal parts art and science. The specific techniques are usually science: there’s an optimal way to make a dovetail joint, for example, and knowing how to make a good lacquer for the finish is a matter of basic chemistry. But getting the best possible sound out of a given piece of wood edges into art and requires intuition as much as experiment.

It takes the skill and experience of a renaissance man to combine years of accomplishment in other arenas and put that intuitive knowledge to work in carving wood and gluing it all together to make a guitar that not only sounds incredible, but looks like a work of art just hanging on the wall.

“I’m pretty proud of that one,” he says, referring to the first Rimini guitar he built, a gift for his wife. It truly is a stunning instrument, one that sounds great, but which also strikes the eye the way a famous painting might—the Mona Lisa, say. The finish glows like satin, and the strings shimmer against the ebony fretboard. The name “Rimini” on the headstock reflects the surroundings he works in, and has worked on, for 40 years.

Ghost Town Guitars, nestled high up in the Montana woods, blends the old world and the new, and Phil Maynard is in his shop, patiently putting together guitars at the cutting edge of modern craftsmanship. MSN