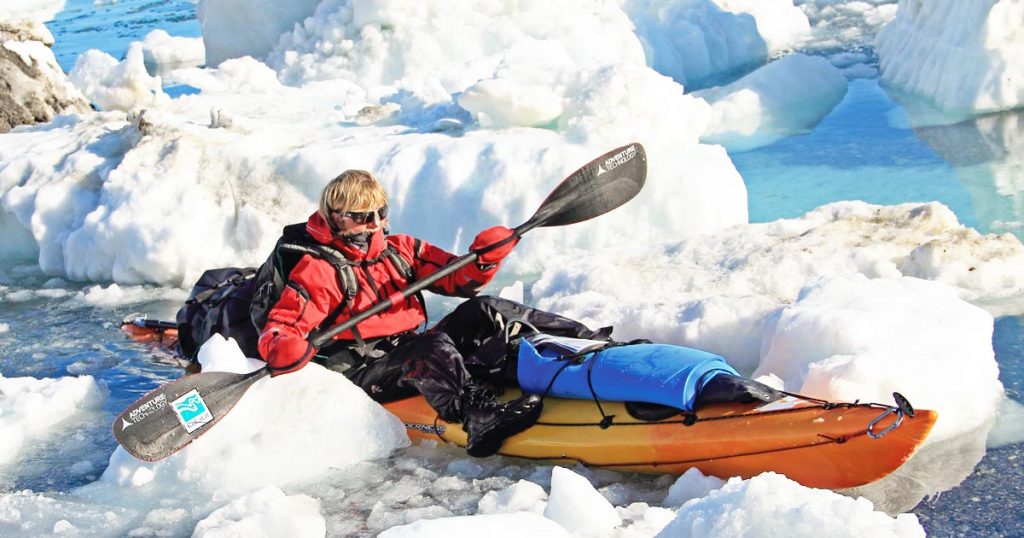 In 2011, author Jon Turk and fellow explorer Erik Boomer circumnavigated Ellesmere Island by kayak. The island, close to the North Pole, is 1500 miles around. The trip took 104 days. When they started the expedition in early May, the ocean was frozen, and they dragged their kayaks across the sea ice. As spring morphed into summer, the ice began to melt. The pair often trekked through waist-deep slush and unstable rubble ice while keeping watch for curious polar bears that occasionally got too close for comfort.

In his trip journal, Jon wrote, “Sometimes the only way to get traction in the snow drift, now gone to slush, is to crawl (and totally embrace the crawl) to haul the kayaks until firmer footing is felt, then stand and walk. When we were crawling through ice water, the remaining 900 miles seemed impossibly far away.”

For that feat, National Geographic named them among the Top Ten Adventurers of the Year.

Not bad for a guy who was then 65 years old.

Now 76, Jon lives in Darby, Montana, with his wife Nina, and he has written numerous books about his explorations.

While the Ellesmere expedition brought Jon the most media attention, an equally terrifying trip in 1999 was to paddle kayaks and kayak-like boats 3000 miles across the North Pacific Ocean from Japan to Alaska.

After working as a commercial fisherman in the Bering Sea, he was used to rough water. But he says of the Japan-Alaska voyage, “I’ve never seen seas so treacherous. Really strung out.”

The expedition followed the arcing coastline of the North Pacific Rim. In theory, the team could come to shore every night to camp on dry land. But, at one point, turbulence shot their 16-foot trimaran kayaks into a huge whirlpool, 10 miles in diameter, where Jon and his partner, Franz Helfenstein, stayed trapped for 36 hours, helplessly turning. At last they managed to escape. Hungry, thirsty, and sleep-deprived, they retreated to a safe camp to “hunker down” and regroup.

Due to that misadventure and more treacherous seas, the pair was 40 to 50 days late for a scheduled check-in at a settlement on their route. At that time, there were no satellite phones, and, back home, Jon’s family was frantic. His father wanted to deploy rescuers, but, given the sheer magnitude of the ocean, a search was unrealistic.

Fortunately, Jon made it home safely.

He had originally intended to complete the trip in 1999. Due to the numerous delays, winter was fast approaching, and Jon decided to wait until the following year to finish the second leg of the journey.

Growing up in a traditional loving family in suburban Connecticut, Jon earned a PhD in chemistry but decided that wasn’t the life he wanted. He longed to explore the globe and developed a five-year business plan to secure corporate sponsors to underwrite his extreme adventures.

Then, during an expedition in 2000, a sudden storm came out of nowhere. He took shelter at a Siberian village, where he hadn’t planned to stop. A woman greeted him at the shore, saying, “We were expecting you. Grandmother created a storm to bring you to us.”

“Grandmother” was Moolynaut, a Koryak shaman and healer.

Jon’s life is divided into two distinct parts: “Before I met Mooynaut and after I met Moolynaut.”

For the next five years, off and on, she guided him on a spiritual journey, deepening his connection with the natural world. He recognized magic in animals and nature and realized, in spite of science’s claims, there are mysteries that will never have answers.

“We are not as in control of ourselves as we think we are,” he says. “There is more power in the human soul than we normally access. That power directs you into a way that’s really you.”

In addition to extreme adventures and writing books, Jon is an in-demand speaker. Along with riveting stories about his expeditions, he makes a strong visual impression on audiences by kneeling on a large inflatable balance ball. In one hand he holds a sign that reads, “Logic.” The sign in the other hand reads, “Magic.”

He says, “We need logic and pragmatism to survive to do what we need to do in the world, whether it’s change diapers or perform brain surgery. At the same time, magical things happen around you, like a child tugging at your pant leg to play a fantasy game or a robin bringing food to its fledglings in a nest under the eaves of your house. You have to reach out and grasp that instant, or it’s gone. We are enriched when we realize the magic in every moment.”

The root of Jon’s thirst for risky exploration is one of the mysteries without answers. None of his family—parents, siblings, aunts, uncles, or cousins—shares his passion. His children and grandchildren apparently didn’t inherit his adventure gene.

Jon explains he no longer has the endurance to pursue extended, arduous, and dangerous expeditions. But his love of spending time in the natural world has not diminished. Still active, but now staying closer to home, Jon and Nina hike and ride mountain bikes in Montana and travel frequently in their van throughout the Western United States and Canada.

His books and articles blend science, nature, history, anthropology, and spirituality into captivating stories. His titles include Tracking Lions, Myth, and Wilderness in Samburu (Rocky Mountain Books, 2021); The Raven’s Gift (St. Martin’s Griffin, 2011); Cold Oceans (Harper Collins, 1998); Crocodiles and Ice (Oolichan Books, 2016); and In the Wake of the Jomon (Ragged Mountain Press, 2006). His website features videos and interviews as well as spectacular photography of the lands and oceans he’s explored.

And he will always continue to pursue magic. MSN