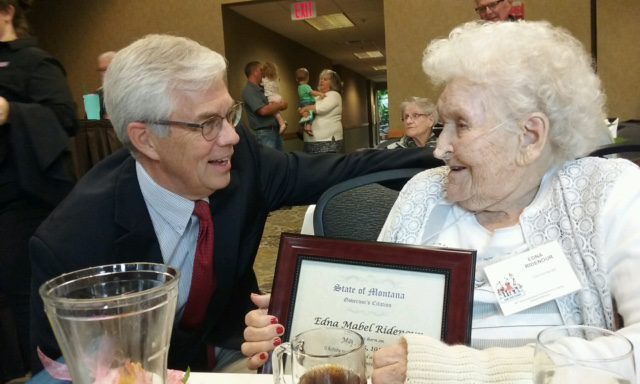 Meet Edna Ridenour, 101 and as sassy and sharp as the day she graduated from Columbia Falls High School. Hers was the class of ’34 with, coincidentally, 34 students and a school motto of “WPA, here we come!” The sole survivor of that class, she has never smoked, never drunk liquor, and never missed either one.

Back then, Ridenour’s family lived in Coram, Mont., on the country lane that would eventually bear their last name of Seville. She and her nine siblings attended one-room schools until they were old enough for high school. After graduating, she married her best friend’s brother, Harold, her partner for 59 years.

Much has changed in Ridenour’s world since her family traveled from Colorado to Canada and then into Montana by covered wagon. The most noticeable difference for her is the loss of farmland to development throughout the Flathead. “All the growth along Highway 2,” she said. “Those fields are now built up.”

Yet some things have remained stable. For instance, she lives in the same home at Lake Five that her father-in-law had built and that she and Harold moved into shortly after they were married. In true Montana style, they added onto it through the decades as their family grew and as resources became available.

“Harold’s father, James Henry, took over an 80-acre homestead at Lake Five, relinquished by a Spanish-American War veteran. To prove up, there had to be a house, barn, and fence built. Trees had to be cleared, stumps ripped out, and the land tilled to grow a crop of barley. It took years to do all the required improvements,” remembered Ridenour. “The timber was so thick, they couldn’t see through it. They couldn’t even tell there was a lake back there.”

One of the things she has especially appreciated about her Lake Five home is witnessing the change of seasons there. “I like that it’s not the same year-round. I like snow, the spring stuff coming to life, and in the fall to see things put to bed again.”

While some folks can’t wait to escape the cold, Ridenour has always been an unabashed admirer of winter. She regularly cross-country skied from Lake McDonald Lodge to Avalanche Creek in nearby Glacier National Park, ice-skated on Lake Five just steps from her front door, and even became a snowmobile enthusiast.

“Probably the most exciting thing I’ve ever done is wear out two snowmobiles,” she recalled. “You could take them anywhere.”

Edna’s youngest son presented her with her first snowmobile. She was so thrilled with the Christmas-morning surprise, she jumped into the driver’s seat wearing her pajamas, housecoat, and slippers and disappeared down the road faster than you can say “Mario Andretti.”

In fact, snowmobiling also happens to be one of two issues that have created some neighborhood challenges for her. But as Ridenour’s son, Bud, remarked, “She’s always steered her own course for all the years she’s been there.” In this instance, it was a request from local snowmobilers wanting to use Lake Five to raise money for youth activities in the Bad Rock Canyon area that caused the friction. Ridenour felt the fundraiser was worthy enough to take the heat from her neighbors, though she did admit, “I was in doo-doo clear up to my knees over that one.” MSN

Another challenge she faced was insuring the public would have access to Lake Five, which is ringed by private land. She and her five children count that among her most important legacies.

“It was something Harold and I discussed and felt strongly about,” remarked Ridenour. “We always wanted people to be able to use the lake. Most of the locals learned to swim here.” Through what turned out to be a long process of selling—as well as donating some land and working in cooperation with the Montana Wildlife Federation and Fish, Wildlife and Parks— the family’s wishes finally came true in 2011, when Paul’s Memorial Fishing Access was established.

An avid lifetime reader, Ridenour’s addiction to books began soon after she learned how to string letters into words and words into sentences. “I’d sneak paperback Westerns that the guys in the logging camps left behind and tuck them into my bloomers,” she recalled. She still reads any Western she can get her hands on, along with anything by James Michener or Ivan Doig. Admittedly, she isn’t fussy about her reading material. If it keeps her interest, that’s good enough.

Another pastime that brings her joy is watching the birds that inhabit the family homestead. “I quit feeding them when the bears are out and start again when they go in for the winter,” said Ridenour, whose bookshelves hold a collection of titles dealing with avian identification and behaviors. “Chickadees, jays, grosbeaks, hummingbirds, and nuthatches all come to the feeders,” she noted. “It was the nuthatches, though, that really surprised me. I couldn’t believe those little meatheads could make that much noise.”

When asked about advice she might offer to today’s teenagers or politicians, Ridenour was quick to respond, “I don’t give advice; I let people make their own decisions. And besides that,” she added, “there are two things I don’t discuss—religion or politics.” But she does make one tiny concession when considering if she has ever had any heroes. “FDR,” she proclaimed. “He was a danged good Democrat and did a lot for this country to pull us out of the slump we were in.”

Economically, her family was as hard hit as her neighbors when FDR began his presidency. And they were times Ridenour has never forgotten. “If we didn’t have potatoes, we’d have starved to death. That’s one thing you can grow here,” she said. “We also raised tomatoes and corn, but they were never as dependable.”

Looking back over a lifetime of memories, one in particular stands out for Ridenour.

“One Christmas when Harold and I were really hard up, we made sure we had one gift to put under the tree for each of our kids, so they would have something to open. He asked me what I wanted, and I told him an ivy plant,” she said. “I’ve given away a lot of little plants from it through the years to a lot of people, and it’s still around here yet!”

Most recently, Ridenour was among 11 Flathead residents over the age of 100 who attended the centenarian luncheon held in Kalispell this September as part of the Governor’s Conference on Aging. The centenarian certificate she received from Lieutenant Governor Mike Cooney keeps good company in her home along with her ivy plant, books, paintings of wilderness and wildlife, and photos of her three sons, two daughters, 11 grandkids, and eight great-grandchildren. Surrounded by all the love one could imagine, she continues to enjoy the priceless gift of an attentive, close-knit family. MSN

Gail Jokerst is a freelance writer living in the Flathead Valley. For more information on her work, visit www.gailjokerst.com