SOUR PICKLES. BRINE PICKLES. NEW YORK DELI KOSHER DILL PICKLES. THE OLD-FASHIONED DILL PICKLES YOUR GRANDPARENTS USED TO FISH OUT OF A BIG BARRELL DOWN AT THE GENERAL STORE. WHAT DO THESE PICKLES HAVE IN COMMON? THEY’RE LACTO-FERMENTED DILL PICKLES. AND I’M GOING TO SHOW YOU HOW TO MAKE THEM. (NOTE: It’s super easy.) 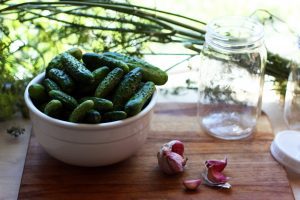 Look in your refrigerator. Is there a jar of pickles in there? If there is, those pickles were probably pickled in vinegar rather than fermented.

What’s the difference? Well, if you’re not a hippie or from Portland, Ore., that’s a fair question. There’s some confusion about what it means to pickle something, because there are two ways to pickle.

One way is to immerse the stuff you want to pickle in a bath of acid. Seriously! I don’t mean like hydrochloric acid or sulfuric acid. I mean vinegar. The low pH of the acid solution is antimicrobial, so it preserves your stuff.

Other bacteria living on your food—including Lactobacillus—love life in the briny sea. They binge eat and reproduce like crazy via anaerobic fermentation until, pretty soon, they’re the boss of the pickle jar pond.

That whole lacto-fermentation process raises the acidity of the brine solution. And, wow, those bacteria love to live in an acid solution even more! Just like with the vinegar pickles, the low pH of the acid solution is antimicrobial to other germs and critters, so it preserves your stuff.

Why Lacto-Fermented Dill Pickles are Better

Vinegar and fermentation both preserve your pickles by creating an antimicrobial environment. So, aren’t they the same? No. They’re not. Not at all. You see, the vinegar pickles are dead. Everything used to make vinegar pickles is sterilized (that means everything is killed), and then the high-acid vinegar goes in to keep everything dead.

The fermented pickles are alive! They’re crawling with live bacteria, and that bacteria is good for your gut microbiota.

You’ve probably read about “probiotics” somewhere. Well, these are those (some of them)! There is increasing scientific evidence that a healthy and diverse microbiota community in your gut is related to good health, so eating fermented food is good for you.

Fermentation also increases the nutritional value of your pickled goods by contributing vitamins and increasing the bio-availability of minerals.

America was named after a Florentine pimp. I learned this from the venerable American Smithsonian Institution. Amerigo Vespucci was also a pickle merchant. He supplied sailing ships of his day (his own, Columbus’s, et. al) with pickled vegetables (lacto-fermented, not vinegar-pickled), and the vitamin C in those pickles kept the sailors from getting the dreaded scurvy.

Then in 1864, Louis Pasteur discovered a way to kill pickles by canning them. Canning your pickles pasteurizes them. That means that heat and pressure are applied to kill everything. And when you do this, your pickles can be stored a long, long time.

That’s a very good thing in some regards. It allows us to store foods without spoilage for a long, long time. For instance, in the zombie apocalypse, we may have nothing left to eat but pasteurized canned goods. Those who’ve read Cormac McCarthy’s The Road will know what I mean. But, wow, sorry gut microbiota, those pickles are dead. And that’s the bad news. The microbial slaughter is indiscriminate. The good bacteria also die.

So, the pickles in your refrigerator? Probably canned vinegar pickles. Dead. You want Vespucci’s pickles, not Pasteur’s (even though I suspect that Pasteur was a nicer person).

So, How Do I Make Those Fermented Dill Pickles? 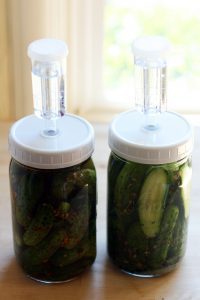 Throw some herbs and spices (there are a lot of options, but dill is an obvious start) and maybe some garlic (if you like Kosher style garlic dills like I do) into a jar. It doesn’t have to be a sterile jar. We’re not canning. Just make sure it’s clean.

Add some sea salt and pack it with cucumbers.

Fill the jar with distilled water (chlorinated tap water will kill your bacteria!) until the pickles are covered.

Let it ferment for at least five days, up to a few months. And there you go. You have pickles.

Here’s what you should know to make your fermentation life easier:

Fermentation Stones: Fermentation is an anaerobic activity, but anything poking out of the surface of the water gets air (aerobic). It’ll get moldy, and you don’t want that. A way to make sure your pickles stay under the surface of your brine liquid is to place a fermentation stone on top. In big crock ferments, these are traditionally actual rocks. For jar fermenting, you can buy little glass fermentation pucks.

Fermentation Airlocks: It’s worth buying some fermentation airlocks that screw onto the top of a wide-mouth canning jar. I use Zatoba Kraut Caps to keep aerobic activity and mold away.

Carbon dioxide is a byproduct of fermentation (if you’ve ever made beer, you know this). If you have an airlock on your fermenting vessel, excess carbon dioxide gas escapes, displacing any oxygen. And oxygen from the air can’t get in. This inhibits mold.

Adding Leaves with Tannins: The longer you ferment your pickles, the more sour they’ll be (full sours in Kosher-dill lingo). But they’ll also be softer. To keep them crisp, a lot of pickle recipes council adding leaves high in tannins, like grape leaves, cherry leaves, even tea leaves from a tea bag. I don’t do this. Then again, I think this is more of an issue for sliced cucumbers. I try to pickle small, whole cucumbers.

Herbs and Spices: You can go nuts here. I used a different mix for each of my two quarts (which is a great thing about making small batches). I love the garlic. In one batch I added some hot chili powder to make them a little spicy. Typical suspects are dill seed, dill weed, mustard seed, coriander, cumin, fennel seed, black peppercorns, cinnamon sticks, allspice, and caraway seeds. Experiment. You have endless opportunities to get creative here. Go easy on the fennel, unless you like licorice pickles (trust me on this).

Now go make some fermented dill pickles! Let me know how they turn out. If they’re good, send me your recipe!

How to Make Lacto-Fermented Dill Pickles

Allow the pickles to ferment in a cool place, out of direct sunlight. After 24 to 48 hours, they should begin to bubble with activity. After three days, you should taste them.

They should be ready to eat in about five days at a crunchy, green “half sour” stage. If you like them “full sour” let them ferment longer—up to several weeks. Test them regularly. When they reach the sourness you like, replace the airlock with a tight lid and refrigerate. They’ll last in the refrigerator for about three months (although mine never last that long).