Flathead Madams and Brothels … Oh My! 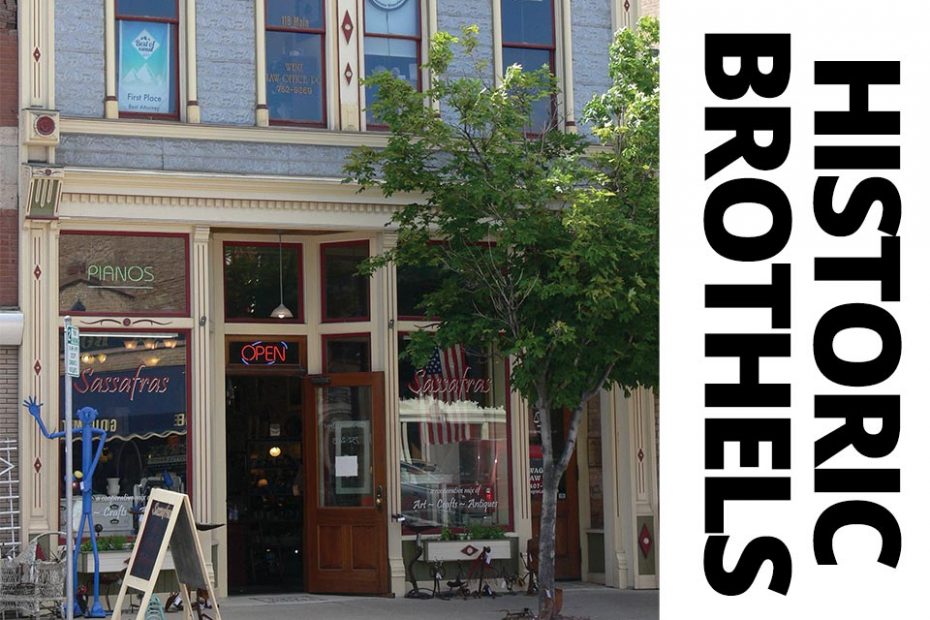 Montana’s notorious bawdy houses and infamous madams left their historic mark on the Flathead Valley. From Whitefish to Martin City to Bigfork to Kalispell, a good time could be had by all, whether they were loggers, soldiers, bankers, or itinerant workers building Hungry Horse Dam.

The town of Whitefish has long upheld its reputation as a place to party. Back in the early 1900s, taverns lined the streets, often renting “furnished rooms” upstairs where weary travelers on the Great Northern Railroad could refresh themselves and be entertained by ladies of the evening.

At one time, the Union Bar was operated by a gent named “Pete” while his wife, “Big Bertha,” oversaw the girls upstairs.

Maple Holmquist was a little girl when she and her mother were stranded in Whitefish. They had run out of money while traveling from Nebraska. They couldn’t afford the ritzy new Cadillac Hotel and instead tried the more modest Union Hotel.
The proprietor, Mrs. Dewar, took pity on them and let them move into her quarters downstairs.

“I don’t really think you want to stay upstairs with the girls,” she said.

Julia Schepfer, who rented out rooms above Casey’s Bar, also invested in Whitefish real estate. By the time the Great Depression hit, she was able to live comfortably off income from properties that included the Shell City Service Station.

Julia reportedly loved diamonds and often asked a local jeweler to make house calls. Always eager to please his customers, Simon S. Stacey hurried to Julia’s parlor, bearing trays of sparkling baubles for her consideration. Julia’s girls made him feel at home by serving tea and crumpets.
Longtime Whitefish resident Frenchy Devall sold newspapers and fish he caught to hotels. Although the young lad didn’t understand the reason at the time, he learned not to make deliveries when a red porch light was burning.

During World War II, troop trains made frequent stops in Whitefish, unloading soldiers eager to visit a brothel operated by Queenie and Charlie Moran. The young men tended to be in a hurry, rushing in and out. Queenie thought they were rude and should have manners enough to visit for a spell. When she complained, Charlie reportedly placated her by saying, “Now, Mama, a quarter’s a quarter.”

Despite the trade they plied, madams often became highly regarded members of their communities. During the building of Hungry Horse Dam from 1948 to 1953, 5000 itinerant workers flocked to the area, usually without family. “Mabel the Madam” (real name: Glessie Lydston) operated Sugar Hill, a bright pink house conveniently located in nearby Martin City.

Mabel maintained high standards, requiring her girls to dress and behave like ladies. Once a month, she took them to a clinic for health checks. Her business earned outright endorsements from surprising sources, including a local minister and the Women’s Christian Temperance Union.

Mabel’s generosity was well known in the community. She always carried a pocketful of quarters, handing them out to neighborhood kids for the movies. She sponsored food baskets for the poor and winter coats for children. Subsequent owners of the Sugar Hill property found old bank records showing Mabel made regular donations to posse and law enforcement organizations.

“Not one rape occurred during that period,” he said.

Laws against prostitution were enforced mostly in cases of overt solicitation. As long as a madam kept her girls mannerly and out of trouble, law enforcement winked.

One spring day in the 1960s, Mabel suffered a cardiac crisis, and a well-known local physician made a call to the bright pink house. As he was leaving, his car got hopelessly stuck in the mud at the same time Sunday morning traffic passed by on the way to church. Amused churchgoers stopped to help, chuckling while the hapless doctor protested his innocence.

In the 1930s, a popular brothel called the Cherry Way Inn was located south of Bigfork in Woods Bay. Orchard laborers, loggers, and cowboys enjoyed a gambling casino, dancehall, and the madam’s downstairs parlor as well as four bedrooms upstairs. When fights broke out, a nurse who lived nearby was called to patch up brawling customers.

In the first half of the 20th century, prostitution prospered right on Kalispell’s Main Street. An elaborate tunnel system built by Chinese laborers connected a bank with several brothels on Main and First Avenue West. Bankers used the tunnels to avoid being seen in less-than-respectable establishments.

The building at 120 Main Street was constructed in 1892 and now houses Sassafras (a co-op featuring art, crafts, and antiques.) In the 30s and 40s, it was home to a bar at street level, a dancehall on the second floor, and tiny cribs on the third floor where ladies of the evening worked.
Current owner John Hinchey restored the old building, preserving the charming tin ceilings, extensive woodwork, and large windows. The former dancehall is now a spacious ballroom used for meetings with an elevated wooden balcony running around the perimeter. One-time cribs became a conference room.

A few doors down at 140 Main, the Past-Time Bar and Cigar Store used to be a lively tavern. In one of the upstairs rooms, a hole had been cut in the floor. A string was tied to a bedspring, passed through the hole down into the bar, where a bell was attached. When a “john” went upstairs, the downstairs drinking patrons placed bets on how many times the bell would ring.

Today in Flathead Valley, the once-booming railroad and logging industries have declined. On top of that, there isn’t a good red light district to be found! MSN