White Sturgeon: Monsters of the Snake 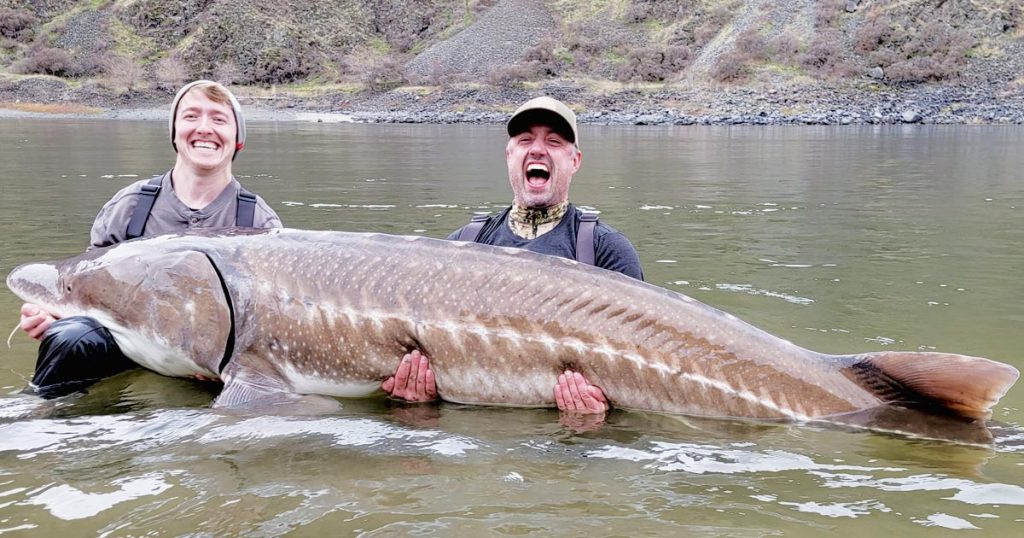 They are remnants of another age and can easily live more than 100 years. And recently, Idaho Fish and Game biologists have been finding monsters over 10 feet, sizes that haven’t been seen in years.

We’re talking sturgeon of course, those amazingly long-lived denizens of the Snake River that were in the system prior to dams being built on the Columbia and Snake.

“In the early 1970s, we had a moratorium of sturgeon fishing,” explains Joe Dupont, IDFG Fisheries Manager from the Lewiston office. “It’s hard to tell exactly how old these big fish we are catching are now, but they are certainly in the 80- to 100-year span.”

The life cycle of sturgeon is a bit tricky in the age of dams, says Dupont.

“Sturgeon spawn in faster water, and dams, by design, slow water in the reservoirs. They are broadcast spawners, with eggs being released and sperm being showered over them. Fertilized eggs will stick to rocks, and when they first hatch, will still have a yolk sac attached. After hatching they begin the larval drift stage of development, and it’s then they are most vulnerable.”

Sturgeon in the Snake travel as far as Lower Granite Dam, looking for food and spawning areas. When the fish are small—under 25 inches—they feed on insects that colonize the river bottom or burrow in the mud. As they grow larger crayfish become part of the menu. Once a sturgeon reaches 35 inches, growth speeds up and clams and mussels are added to the diet.

Pre-dam days found sturgeon feasting on dying salmon as well as native lamprey, which were in the tens of thousands.

“Once sturgeon reach 35 inches, they grow a lot, and survival is much better,” adds DuPont. “At this size, predation is basically nonexistent. However, in the larval drift stage and up to 15-inch juveniles, they are sitting ducks for predators.”

The Lower Granite Dam has a 37-mile-long pool behind it. And new species are turning up in the slack water, where additional food is plentiful in these quiet waters.

“Siberian prawns are in the system now,” explains DuPont. “They live on the bottom and gobble up larvae. Bass eat smolts up to 8 to 10 inches, and pike minnows eat them, too. The river is a tough world for the small and young.”

But the good news about sturgeon, and especially these big boys, is, once they get big, their survival rate increases to between 92 and 96 percent. Those are the adult sturgeon that are able to spawn.

If a population of sturgeon has only a 50-percent survival, that translates to just 2 percent being able to spawn, so these recently caught larger, older fish help support a more robust population.

Historically, caught sturgeon often weighed more than 1,000 pounds. They are still the largest fresh water fish in North America. Now, however, the most recent record (set in 2016) was 117 inches and 500 lbs. The three sturgeon IDFG biologists have caught this year were each over 10 feet long.

The data on past and present sturgeon habitat, food, and growth patterns is rather limited. But, with continued monitoring, IDFG hopes to answer additional life-cycle questions about these ancient fish.

After 30 years as a fisheries biologist, Joe DuPont is excited about the fish they’ve tagged this year. It had been more than five years since a 10-foot white sturgeon was caught and tagged, so to catch and tag three monsters in one week is phenomenal.

Fish this size are the stuff angler dreams are made of. So, check the regs, and get out there, and try your hand at catching one of the monsters of the Snake. MSN