Besides providing great entertainment, there’s another reason to celebrate the Bigfork Summer Playhouse. This magnet of frolicking fun and musical narratives is Montana grown and Montana owned. Each summer for 63 years, the lights have flipped on, and the play has begun, even during COVID.

Thomson was from Harlowton, but being a Montanan didn’t seem to fulfill the requirements. Finally in 1964, when Thomson enrolled in the master’s program in theater arts at the University of Montana, he was hired as a technician and became part of the crew of actors, musicians, technicians, and directors.

That first year when Don got to Bigfork, he was assigned the job of getting a hundred theater seats out of storage and bolting them into place. He had no tools, so he borrowed some from a garage. A few years later, he found another hundred seats that were for sale in his hometown and took them back to Bigfork in a borrowed garbage truck. With additional seating added even later, 435-filled seats have become a packed house for shows now.

In 1965, a woman named Jude (Judith) joined the troupe and became the piano player. Don and Jude married that year, and both became an integral part of the Bigfork Summer Playhouse from then on. They had two sons who grew up at the theater, and both have a career in entertainment today.

In 1968, Professor Brown went on to other entertainment venues, and the Thomsons acquired the Bigfork Summer Playhouse production business.

For six years in the 60s, the Thomsons lived in Kearny, Nebraska, where Don taught theatre arts, and Jude taught piano lessons. As soon as the school year ended, the Thomsons would pack up and move back to Bigfork to produce plays for the summer. Then Don took the stagecraft position at C. M. Russell High School in Great Falls, Montana, for six more years.

This itinerant life went on until they could concentrate on the Summer Playhouse full time. This will be Don’s 56th year as the playhouse’s producer.

Brach, the Thomsons’ older son, is now directly involved in the workings of the playhouse as the musical director and associate producer. Replacing his mother, he has four keyboards set up in the pit, and other musicians, such as percussionists or horn players, join for the different musicals.

Brach also produces five shows through the children’s theatre during the off season. The 30 to 40 children in the plays practice for two weeks. They perform a Friday matinee for area schools and perform again Friday and Saturday nights for two weekends . In addition, they put on another matinee on the Sunday afternoon.

Until Jude gave up the responsibility of being musical director, she could boast she never missed playing piano at a rehearsal or production.

With Brach as director now, Don and Jude take on whatever needs doing, for example box office duties. Jude also helps with casting for the children’s theater, plus the couple also goes on regular recruiting trips.

Every year they select approximately 20 actors for the summer playhouse, from a pool of about 3,200 applicants. They also hire directors, musical directors, and choreographers. The crew puts on four musicals over the course of the season.

For six nights at the end of each season, they stage musical hits from a previous era.

In addition, they hold a July a Benefit Review, and ticket sales for that evening go toward scholarships for crew members.

In 1971, the Thomsons were able to purchase the physical plant where Bigfork Summer Playhouse was located. They tore down the old theater, because it was no longer efficient, and by the 1988 season they saw the completion of the new theater’s construction. It took years to acquire needed additional space. A final 2003 expansion provided a dormitory for the players, a costume shop, a scene shop, and a rehearsal space.

During a play, the unexpected can happen. Don remembers one time, during the performance of Arsenic and Old Lace in the 60s, an actor portraying one of the old ladies came down a set of stairs, and at the bottom was a platform where she was to stand. On this particular night, the crew forgot to put the platform in place, and the actor ended up stepping into a hole several feet deep.

She didn’t miss a beat, however. After stepping into the hole, she delivered her lines, even though the audience could see her only from chest up. She wasn’t hurt, and the play went on.

Developments beyond the Thomsons’ control can also influence activities at the playhouse. Plans for the summer productions were already underway when COVID hit Montana in March 2020. It was decided that with extreme safeguards the show must go on. Being cautious, all of the crew went into quarantine for two weeks previous to the first show. As in the 2021 production season, the Thomsons will keep a close eye on the health of the crew this year.

Performances slated for the 2022 season are Mamma Mia!, Guys and Dolls, Freaky Friday, The Full Monty, and Hits from the 50s, 60s and 70s. Purchase tickets online, by mail, or at the door. For more information, visit the web at bigforksummerplayhouse.com, or call 406-837-4886. MSN 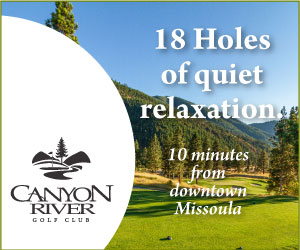