Tatting: Not Knitting or Crocheting 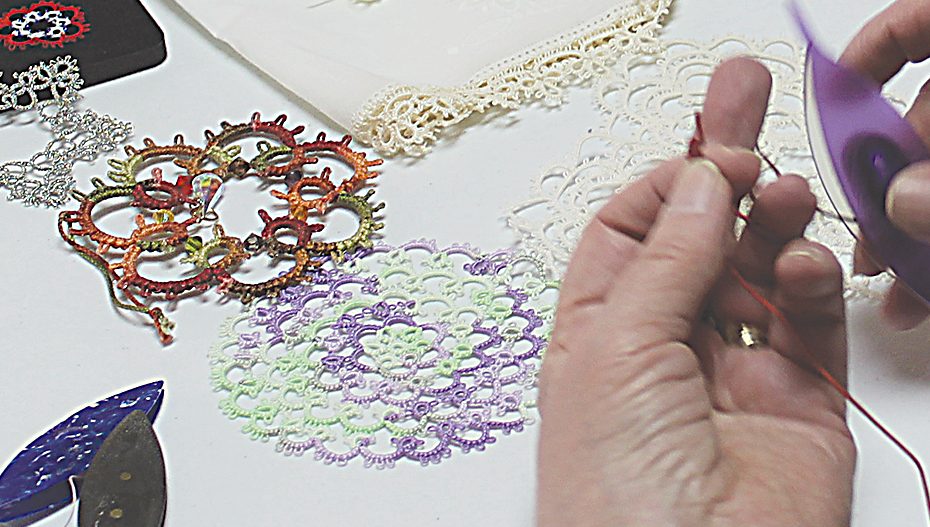 When you hear the word “tat,” you might think of the expression “tit for tat,” which means the infliction of an injury or insult in return for one that has been suffered. But tat usually indicates a type of handiwork.

Tatting is the art of making a finished item through the process of loops and knots. It may have begun when fishermen were on long trips out to sea and used the same techniques for repairing nets to make gifts for loved ones at home. Then the women took up the art and used finer thread to make intricate pieces as fine as lace.

The art of tatting is thought to be about 200 years old. The oldest tatted lace we have today was made around 1800. Nineteenth century women often carried a shuttle and project in their apron pockets and would take them out to work on while waiting for something else, such as food cooking on the stove.

Ginny Burgus of Great Falls, Mont., is one of a few who tats.

“My mother, who had three daughters, taught me and my sisters to tat,” she said. “For some unknown reason, of the three, it stuck with me. I need to keep my hands busy, so I knit, crochet, or do cross stitch, but I always enjoy going back to tatting. I have been tatting for 51 years, and I seem to enjoy it more now.”

Frequently, Burgus enters a piece of tatting in the Montana State Fair. “Several years ago, I was getting a piece ready when I accidentally clipped a thread, and the project started unraveling. There was no way to repair it. I threw this wonderful piece in the trash and had to forget about having a project in the fair that year,” said Burgus.

To tat, you only need thread, a shuttle, and your hands. Some people use a needle instead of a shuttle, but those who have been doing it for many years tend to prefer the shuttle.

The boat-shaped shuttle, with an inner bar that holds the wound thread, helps guide the string through loops. It is usually around three inches long with a point or hook on one end to ease construction. Shuttles have been made of many different materials like metal, ivory, wood, cellulose, and shell, but today most tatters use plastic shuttles.

Because of the various shapes and construction materials, old shuttles have become an antique collector’s item.

“Most of us who tat are so intrigued with the different shuttles that we have also become shuttle collectors. I have bought them in second-hand stores, and friends have found them for me,” said Burgus. Because the bar came out of the shuttle made by the Aero company, it was Burgus’ favorite. “These shuttles are no longer being made,” she said. “The company’s building burned, and the owners didn’t go back into business.”

Although a ny string can be used to tat, it works best if the string is hard and not prone to untwisting. For example, butcher’s cotton string would likely be too coarse and would untwist. The finer the string, the more delicate the finished item.

Women don’t use doilies on their furniture and table tops anymore, but other tatted items are popular, such as Christmas ornaments, bookmarks, earrings, and edging for collars. Like the process for quilts, sections of a large finished product can be made and then stitched together, such as when a bridal veil is tatted. Beads, sequins, and ribbon can be added to the tatted project.

Tatting is popular in France, Italy, and Japan. Even though not as many people in the United States tat today, it is not a lost art. New instructional books are coming out all of the time. Because of the easy-to-read diagrams, any English-speaking tatter can also follow a foreign-language instruction book.

Upon a rare occasion you might see someone with thread and a small shuttle moving the thread back and forth through her hands. The shuttle will definitely be a sign that the person is tatting. Instead of just watching someone else tat, you might even like to try it yourself. MSN