Book Review: The “Sneakin’est” Man that Ever Was by Jim Harmon 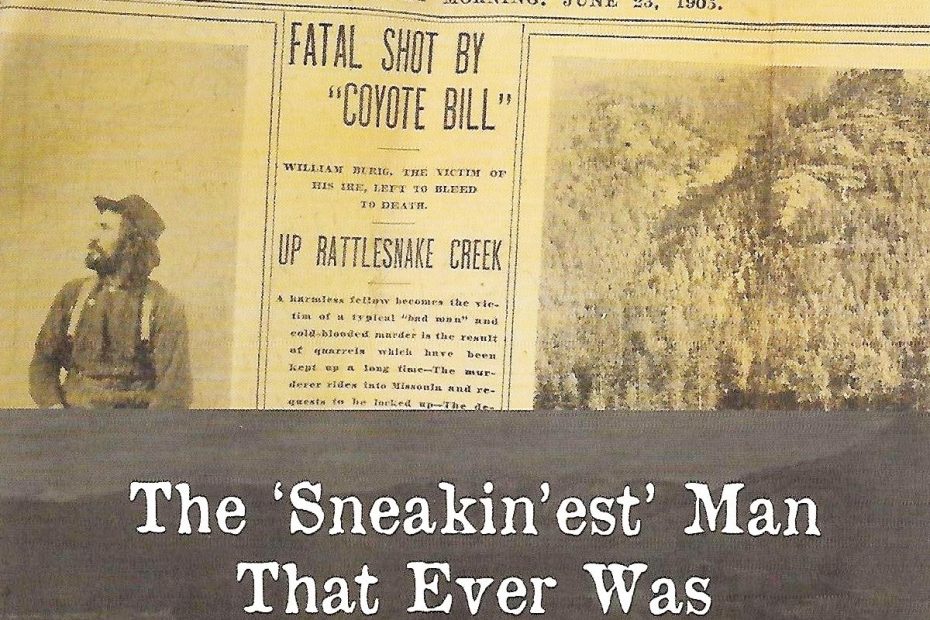 In The ‘Sneakin’est’ Man That Ever Was: Headline Stories of Montana’s Early Days—Harmon Histories Vol. 1, the Treasure State’s past comes alive. Montanans and US history buffs in general are sure to enjoy this book.

The Missoula Current’s history columnist and a Libby native, author Jim Harmon obviously holds a deep love for his state. The amount of research he did for this book is impressive, as is his understanding of the subject matter.

The stories in The ‘Sneakin’est’ Man are based on late 19th century Montana newspaper accounts and are accompanied by wonderful black-and-white photos.

Harmon features some fascinating, wild, and crazy characters. One of them is Coyote Bill Briscoe, an irascible and disliked hunter, trapper, and miner who lived in a ramshackle cabin on Rattlesnake Creek. Bill, the titular sneakin’est’ man that ever was, told tall tales to newspaper reporters, married five times, at least, and got into deadly fights with his neighbors.

Being a Mark Twain fan, I particularly enjoyed the story about author Samuel Clemens’ 1895 theatrical journey through Montana, part of his international tour that year.

Another interesting chapter is on Mary Gleim, “Queen of the ‘Midway Plaisance.’” After moving to Missoula in 1888 with her husband, Mary gained a good deal of wealth through selling real estate and importing (and smuggling) “everything from lace goods to opium.”

Gleim was infamous for her legendary hot temper, numerous altercations with the law, and for being one of Missoula’s most successful brothel owners.

Browsing through the book’s table of contents is like taking a quick trip through Montana’s colorful history, with chapter titles such as “End of the Badlands—The Night the Red Lights Went Out,” “Snap and Prince—Missoula’s Famous Fire Horses,” “Helena’s Broadwater Hotel—Luxury & Comfort for the Elite,” and “Rag Time and Tango—Intolerable, Immoral Dances.”

I think my favorite title might be “Baseball Fever—Potatoes, Rutabagas & Onions Fly Through the Air,” closely tied with “The Bon Vivant Barber and The Deceitful Dressmaker.”

I recommend you pick up a copy of The ‘Sneakin’est’ Man That Ever Was. You’ll have a great time hanging out with some truly entertaining folks from the Treasure State’s not-so-distant past. MSN