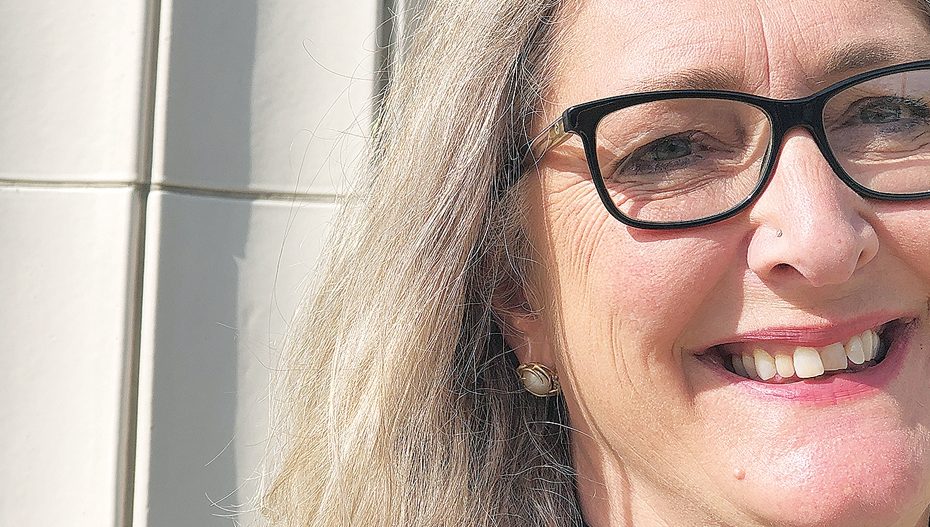 Kellie Goodwin McBride is what you might call a crusader for social justice. Now the director of Criminal Justice Services in Helena, Mont., she has quite a resume of helping others.

“I got a degree in Human Services from Cal State Fullerton,” she said. “I took one class in that field to fulfill a requirement, but I knew immediately I had found my calling.”

After a fulfilling 20-year career in Human Services in California, McBride returned to her home state in 2009 to take her dream job as Director of the YWCA in Helena.

“I came back to Montana for all the reasons I left it,” she laughed. “Growing up, it was hard to get away with anything as a kid, because everyone knew everyone else and watched out for each other’s kids,” she said. “After high school, I was swayed by the charm of the city, of California, but when it came time to raise my youngest, I kind of liked the idea of that small-town experience.”

Kellie Goodwin McBride’s great-great grandparents were homesteaders down near Townsend in the Deep Creek valley. Her family continues to work the land that has been in the family for five generations. “The original homestead ranch was much bigger, but we still have 67 acres and raise alfalfa,” she said.

She and her husband have raised five sons who are all off on their own now, and they have a daughter who will go off to college in the fall.

Since coming back to her home town, McBride has contributed to her community in the most meaningful ways possible.

She spends a lot of time both in Broadwater and Lewis and Clark counties, serving in the Townsend Rotary and volunteering her time for local projects.

When the YWCA position opened, she knew was a good fit.

“The mission summarized everything that matters to me,” she said. “The organization ‘is dedicated to eliminating racism, empowering women and promoting peace, justice, freedom and dignity for all.’ Every one of those things was why I got into human services in the first place.”

In her seven years at the YWCA, McBride oversaw a major renovation of the organization’s building on Park Street. She demonstrated her grant-writing and fundraising prowess, increasing the budget from $5-thousand to over $700-thousand. The surge in funding expanded the YWCA’s ability to serve homeless women and women in crisis.

A big part of her new job is helping people charged with a crime—many of them perhaps for the first time—navigate the legal system.

“One of our goals is to help ensure that people meet all the requirements of their bail or probation so as to reduce recidivism and minimize the time they actually spend in the system,” McBride explained. “So for example, we provide everyone who is involved with pre-trial services a cell phone, so they can communicate quickly with the offices they need to, and they can make sure to meet any court-ordered dates.”

When pre-trial services first began, McBride expected there might be considerable opposition to it in the criminal justice community.

“Actually, I have been surprised. Some of the judges love what we do and routinely send alleged offenders to us,” she said. “in fact, it’s public defenders who most often are resistant to us, because I think they are worried that our interactions with their clients could weaken their cases.”

The goal for Criminal Justice Services is to make the community safer and reduce the number of people in jail awaiting trial.

“Our agency arose as part of the 2016 bond that rebuilt the jail, which was ridiculously overcrowded and underfunded,” McBride said. “My heart is really in criminal justice reform. We want to do everything in our power to make sure that those who come to us navigate the system and that they don’t reoffend and end up in jail.”

“One of the measures is whether or not those awaiting trial re-offend in the interim,” McBride explained. “Our success rate is 85 percent, meaning that of all our clients, 85 percent do not re-offend, and they make all their required court dates.”

One surprising fact Kellie points out is that 53 people in her caseload are senior citizens. “That’s about 16 percent of the total caseload.” Navigating the criminal justice system can be especially difficult for individuals over 50, since they may have lots of other complicating factors: medical issues, extended families to worry about, and a steeper learning curve when it comes to technology. A program like pre-trial services can be especially helpful in their case.

“I see people of all kinds, from all sorts of backgrounds, come through our doors. I see the system stacked against them.”

For someone who as a young person identified human services as her passion, Kellie Goodwin McBride has fulfilled her dream and compiled an impressive resume of helping others. To see her vibrant smile and hear her talk with such passion about trying to do good in the world, you’d never guess she’s been at it for almost thirty years. MSN