The Associated Press called the race for Zinke Thursday morning.

Tranel held a moderate lead for most of Election Night, but successive updates from Zinke’s home county of Flathead tilted the needle the other direction through the early hours of Wednesday morning. By Thursday morning, Zinke had cemented his lead.

“I’m incredibly grateful to the people of Western Montana for once again placing their trust in me to fight for them in Washington, D.C.,” Zinke said in a statement Wednesday night. “The voters saw through the vicious lies and deceit of my opponents and radical political groups. Truth matters, and now it’s time to fight for freedom and protect our way of life in Montana.”

Speaking at the Maureen and Mike Mansfield Library in Missoula Thursday, Tranel conceded, thanking her supporters and pledging to continue fighting for the state.

The race for Montana’s western district was one of the state’s highest-profile contests this election cycle, as Montana Democrats looked for an opportunity to send one of their own to Congress for the first time since Pat Williams. But Zinke, running in a Republican-leaning district, dashed that hope.

Montana has had only one U.S. House district since the 1990 U.S. census, but regained a second seat following the 2020 count. The western district, created by the 2020 Districting and Apportionment Commission, includes 16 counties and two Native American reservations. President Donald Trump carried what would become the western district by 7 points in 2020.

“It is incredibly humbling to once again have the support of the hardworking people of Montana and I am grateful to the citizens of MT-02 for entrusting me with the responsibility of representing them in Congress,” Rosendale said in a statement on Facebook early Wednesday.

Incumbent Supreme Court Justices Ingrid Gustafson and Jim Rice were re-elected to their positions on the state’s highest court, beating out their respective opponents, James Brown and Bill D’Alton, both attorneys. Rice, the court’s longest-serving member, won his race with 55% of the vote, one of the first contests to be called by the Associated Press on Wednesday.

The race between Brown and Gustafson was closer, but still saw an 8-point margin of victory for the incumbent. Brown, the Republican Party’s favorite in the nonpartisan race, appeared to be easily outperforming Gustafson in some rural counties, but the race between the two was tighter in medium and larger counties, with Gustafson in the lead. The incumbent held onto margins in Gallatin, Cascade, Lake, Lewis and Clark, Yellowstone and Park counties as of Thursday. The incumbent dramatically outperformed Brown in Missoula County, leading with 70% of the vote, or more than 37,000 votes, according to the latest results.

The supermajority allows Republican lawmakers to put proposed amendments to the Montana Constitution before voters even if those proposals face united opposition from Democrats.

Democrats lost at least one seat in the state’s lower chamber, the majority-Native House District 41 in southeast Montana. 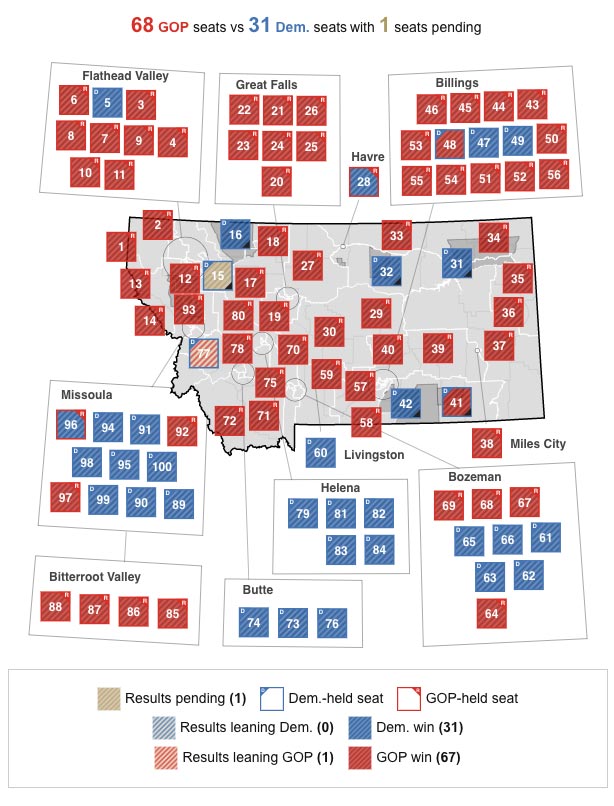 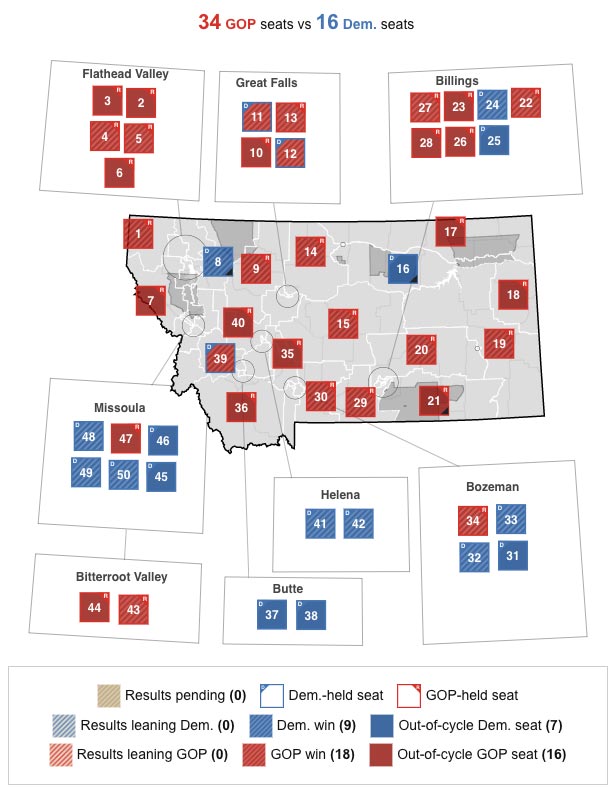 Kyle Schmauch, a staff spokesperson for legislative Republicans, celebrated Republican wins in an emailed statement Wednesday, saying the party is on track to win a “historic supermajority.”

“Republican lawmakers are ready to ramp up their efforts to provide Montanans with financial relief, strengthen our economy, protect our freedoms, and preserve the Montana way of life in the upcoming session,” he wrote.

Montana Democratic Legislative Campaign Committee Director Scott McNeil said in an interview Wednesday that many Democratic candidates had outperformed their party’s showing in the 2020 presidential election, though in some cases not by enough to win districts that skewed heavily Republican then.

“We’re disappointed with some of our losses and we’re excited about some of our tough wins,” McNeill said. “We go into the legislative session prepared to work with Republicans on common issues and disagree and stand up and hold them accountable when needed.”

Democrats last held a majority of seats in the Montana Senate in 2007, and of the Montana House in 1991.

In the race for an open seat on the state’s utility regulation board, Republican Ann “Annie” Bukacek secured a 13-point victory over her Democratic competitor, John Repke, who conceded the race Wednesday evening.

Bukacek, a Kalispell physician, will replace termed-out commissioner and former PSC chair Brad Johnson. With Bukacek’s win over Repke, a retired Whitefish executive, the PSC will retain its decade-long all-GOP streak. Montana voters haven’t sent a Democrat to the PSC, which regulates monopoly utility companies in the power, water, garbage and telecommunications space, since 2008.

Bukacek didn’t immediately respond to a request for comment.

In a concession emailed to MTFP Wednesday evening, Repke lamented the Republican lean in the four-county slice of northwestern Montana comprising the commission’s District 5.

“I am grateful for the strong, bipartisan support that I received,” he wrote. “In the end, the majority of voters chose to stick with party over all other considerations.”

District 1 incumbent Randy Pinocci was uncontested in the general election after defeating GOP challenger K. Webb Galbreath in the primary. His district comprises a vast swath of northern Montana, including much of the Hi-Line.

Montanans split their decisions on Election Day about the two ballot initiatives up for a vote. Voters easily affirmed a constitutional amendment, C-48, making explicit the inclusion of electronic data and communications in the provision protecting residents from unreasonable search and seizure. That measure passed with 82% of Montanans voting yes and 18% voting no.

The higher-profile question on the ballot was the Republican-sponsored LR-131, known as the Montana Born-Alive Infant Protection Act. That measure failed with 53% of voters in opposition and 47% in support, a margin of more than 22,500 votes.

In statements about the election results Thursday, medical organizations and reproductive rights advocacy groups celebrated LR-131’s failure, declaring it a compassionate outcome for families grieving the loss of a newborn and a victory for medical privacy.

“Today’s win sends a clear message to state leadership,” said No on LR-131 campaign coordinator Hillary-Anne Crosby in a Thursday email. “Montanans demand our right to make private health care decisions for ourselves and our families with the help of our trusted medical teams — and without interference from politicians.” MSN

PrevPreviousPet Sitting: The Right Gig for Seniors?
NextHomelessness Among Elders on the Rise, Driven by Inflation and Housing CrunchNext 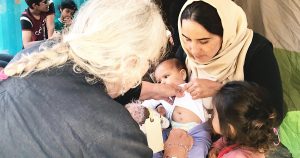 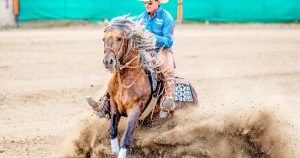 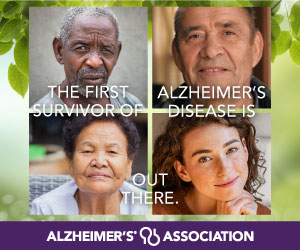