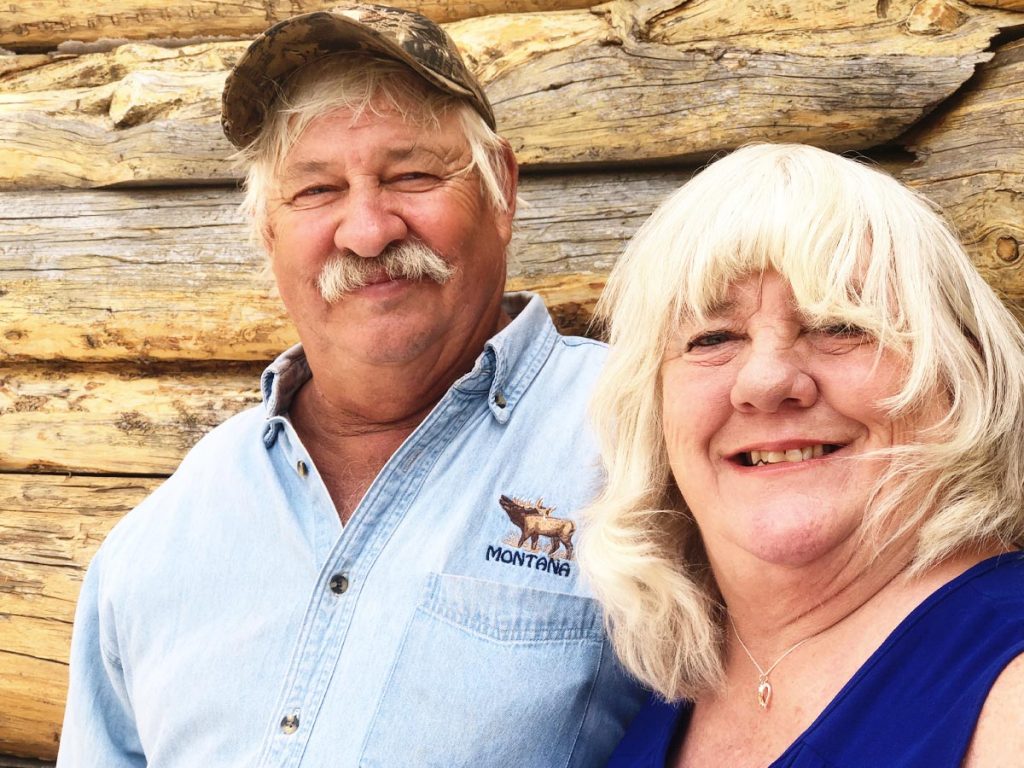 Almost seven years after pouring the foundation to build their dream home, Jim and Roxanne Swartz of Stockett, Mont., have to admit, it’s taken quite a bit longer than they expected.

But theirs will be no standard, run-of-the-mill home constructed by a contract crew, using mass-produced materials, and located in a quaint neighborhood with a pleasant view, mind you.

This will be a log home made from locally sourced trees, hand-peeled and assembled largely by their own labor, with the occasional help of close family and friends. And we’re not talking about a rustic, one-room cabin here. We’re talking about a 5,000-square-foot home—two levels plus a loft—seated on a bluff overlooking a 500-foot deep coulee with a stunning backdrop of rolling hills and mountains as far as the eye can see.

Neither Jim nor Roxanne had any log-home building experience prior to this project. Jim, who’d spent his life on this family ranch, had worked a bit with logs, building fencing to keep the cows in and the critters out. But for actually building a livable structure?

Jim just smiles and shrugs. “I watched a few YouTube videos to figure it out,” he says.

Taking on a massive building project like they have in their golden years would scare the bejabbers out of an old city-slicker like me.

But then Jim and Roxanne are Montana ranchers, after all—full of grit and gumption.

Jim’s grandparents bought the ranch from the original homesteaders and passed it on to his parents, who there raised a family of three boys and six girls.

When Jim’s parents retired from the ranching life, he and Roxanne bought the ranch and moved into the old house not long after their marriage in 1979. They’ve raised their son and daughter in the old house and survived the ups and downs of ranching for more than 40 years.

While I am a city-slicker (if you can call 4 miles south of Butte, Mont., a city), I did work on several ranches near Butte while in my teens, and I have a healthy respect for the long hours and hard work ranchers put in nearly every day.

Plus, I learned ranchers must be the proverbial jacks-of-all-trades, continually fixing broken machinery, feeding and birthing cows, mending fences, and handling the many daily chores required to keep an old ranch running.

On top of that, they are much like riverboat gamblers who bet every year that the vagaries of harsh Montana weather won’t ruin the hay crop or cause too many early calving deaths. Or the wildly fluctuating hay and cattle prices won’t force them off the ranch altogether.

So I understand how ranchers who’ve been in the up-and-down business for 40 plus years would have the gumption to tackle a big project like a massive retirement log home.

Indeed, they have had 40 years of training to be eternal optimists.

What’s even more amazing about this endeavor is the couple isn’t relying on architectural blueprints for their future home. Their entire project is sketched out on a piece of graph paper that reveals a rough perimeter of the structure. A few lines here and there indicate the different rooms, with eraser marks evidencing an ever-evolving plan.

These plans show no dimensions, reveal no instructions for window placement, nor electrical, or plumbing details. That info can be found scattered on bits of scratch paper the couple stores in a small plastic  bag, or in Jim’s pocket as he works. Jim sheepishly explains, “Those are my brains.”

While neither Jim nor Roxanne have any special expertise in electrical or plumbing work, they have developed a sort of bartering system with friends and neighbors, trading hay for assistance primarily with electrical specifics and various ranching chores for plumbing and other structural assistance.

As for the many logs needed for the big structure, they bought a truckload  from a logger then cut and hauled many more from forested land in the Big Belt Mountains near Neihart and Monarch, Mont.

Jim meticulously hand peeled each log and began to stack them in the house to form the walls.

“I needed to find a way to get the logs higher than a couple of rows,” said Jim. “I designed a crane with an electric winch for a hoist to get ‘em up to 13-feet.” With the hoist, Jim was able to construct all walls with only one or two helpers—usually Roxanne and their son, Travis.

The hand-peeled logs with their patterns of bare, light-colored fir and splotches of darker brown areas where thin, inner layers of bark have been left intact, whether purposeful or not, have quite the overall artistic look when stacked together to form a wall. It’s a nice touch for a tough old rancher who’s never built a log home before!

All About the Views

The views from inside the home are just as stunning as if you were standing outside on the bluff. Huge, picture windows, spanning 5 by 10 feet, grace the walls on the two main levels of the house, facing east. Jim did admit to being a bit nervous when installing those monster pieces of glass.

“Anybody who would put those big windows in an already big house must really be claustrophobic!” said Roxanne.

It’s no wonder this project has taken some time. Both Jim and Roxanne also have had to balance time spent on the log home with time required to keep the ranch running.

Both have jobs as well. Jim worked full-time for a while as a school custodian for several months after starting the log home project, and both now work as bus drivers for the Centerville School.

The Montana winters haven’t helped, either as Jim has had to shovel almost 3 feet of snow off the unprotected main floor more than once. This winter the house should be roofed in.

“I shouldn’t have to shovel snow this year off the dang first floor,” said Jim.

The couple has had to deal with a series of personal tragedies in the time they’ve been constructing their dream home.

Not long after construction started, Jim’s closest brother died in a car wreck. About a year later his second brother died because of a long-standing health issue. A particularly harrowing accident then killed one of Jim’s good friends, Fred, while he was helping to load logs for the home onto Jim’s ranch truck. Less than a year later, Jim and Roxanne’s daughter, Angela, was killed in an auto accident.

These tragedies made Jim and Roxanne question whether they should even continue on with their dream.

“The grief of the losses just fueled us to finish the project to the end, because both Angela and Fred would have wanted that,” said Jim. Angela’s kids would need a place of peace and comfort in their grandparents’ new log home, and Fred’s hard work should not have been wasted.

So the couple has persisted. They are much closer to the finish line now, and they don’t appear to be overly optimistic in predicting they can move into the new digs in about a year from now.

I have a hunch that when the snow flies next winter, neither one of the Swartzes will be spending much time in their rocking chairs. As Jim said, “There’s always another project on the ranch.” MSN