Steelhead: A Fish for Fanatics 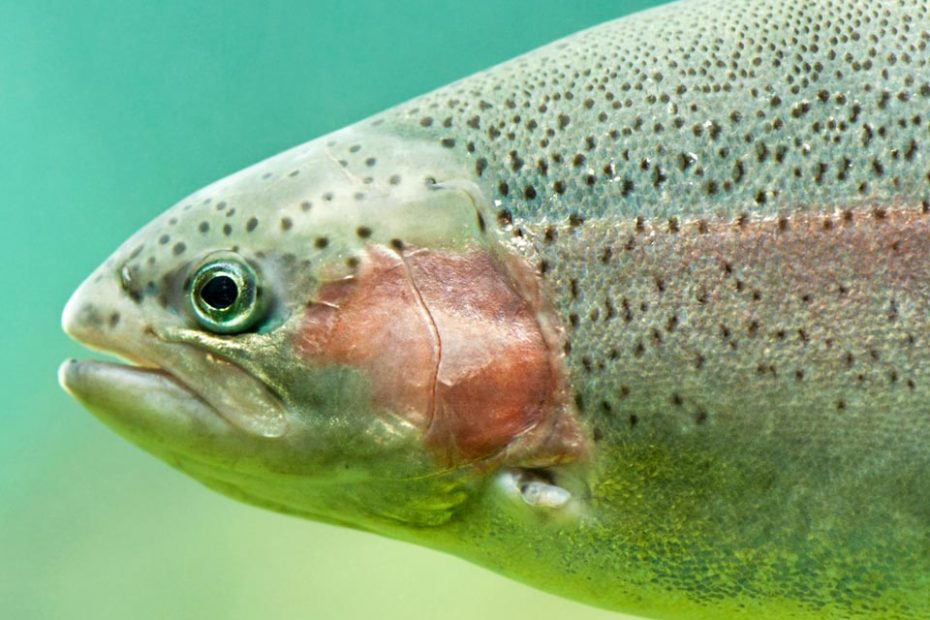 Fingers stiff and bumbling, rod coated and heavy with ice, and water swirling at just above freezing has the guy near me on the bank grinning ear to ear. Steelhead anglers are a different breed. They’ll cast all day in frigid temperatures to MAYBE catch one fish. And they think it’s worth it, frozen extremities notwithstanding. I have to admit, there are days that I’ve joined that fanatic group.

When my son was too young to drive, I dutifully took him an hour from home in the early morning to a coastal stream in Oregon, returning eight hours later. There he’d be wearing a sleet-coated jacket, holding one gleaming fish fresh from the ocean still spangled with sea lice. But it was still a hard sell for me as standing in frigid water with a normal Oregon rain falling all day while the temperature hovered right at 33 degrees just couldn’t lure me out. So, while my son continued his obsession with winter steelhead, I put my experience on the back burner.

When I moved to Idaho, steelhead fishing suddenly moved to the top of my to-do list. We’ve got cold weather alright, but it often comes with sunshine to take the edge off enough to enjoy being out on the water.

Fishing is a Zen meditation for the antsy. No matter what, you can’t rush the river, and you can’t make fish bite, especially Salmon River steelhead. But the rhythmic casting of line, February sunshine flowing like warm syrup over winter weary bodies, and the awesome, steep-sided canyon that heats the river make fishing for steelhead here a near mystic experience.

There’s no one way to fish for steelhead: some anglers prefer fly rods and barbless hooks, some bait and tackle, and others love casting two-handed with big, muscly spey rods.

While most folks fish from boats, I know plenty of fishermen who are successful casting from shore or wading carefully in cold, winter water.

The Salmon is a big river, so there’s no worry about crowding, unlike some places where the urban scene produces combat fishing. You’ll see other anglers on the river, but there’s plenty of room for everyone here.

Steelhead often frequent tail outs because they have deep water to escape to. These trailing waters of pools act like way stations for the fish and are often referred to as resting lies. On a river as deep and mighty as the Salmon, look for these quiet nooks as you work the water. But, to be honest, I’ve had steelhead hit the line in the middle of the river, far from any quiet water, so be ready for anything when you match wits with these fish. 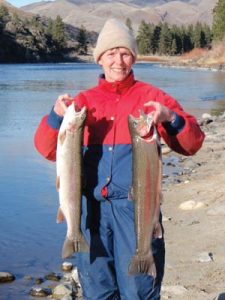 One time I felt a tiny tug on my fly line, a sign there was probably a smolt on my barbless hook. I was mending my line and pooling it by my feet in order to release the fish, when a sudden whack on the line and much heavier weight indicated something else was going on. In just a moment, a steelhead suddenly leaped from the water and spit out the hooked smolt. So yes, sometimes bait is an excellent way to get steelhead!

Steelhead anglers are loyal to their favorite rivers. While I love the Salmon, friends are equally adamant about good fishing on the Little Salmon in February, where steelhead pool below the falls, as well as the Clearwater and the Snake in this west central region of Idaho.

If you’ve never fished for steelhead before, ask a knowledgeable friend to take you and show you the ropes. Or, check out local guides: they have all the latest information on the run and know the river like the back of their hand.

When fishing new water, I’ve found that hiring a guide for the day helps me be successful in the future on my own. It’s also worth your while to call the Idaho Fish and Game: not only will you get up-to-date on any new regulations, but the fisheries biologist can often point you to water that is regularly producing steelhead.

Whatever you do, don’t put off fishing for steelhead another year. After this COVID-19 experience, I realize waiting for the good times to roll doesn’t always pan out. So, grab a rod, pick a cold, sunny day, and hit the water, to become a steelhead fanatic!  MSN