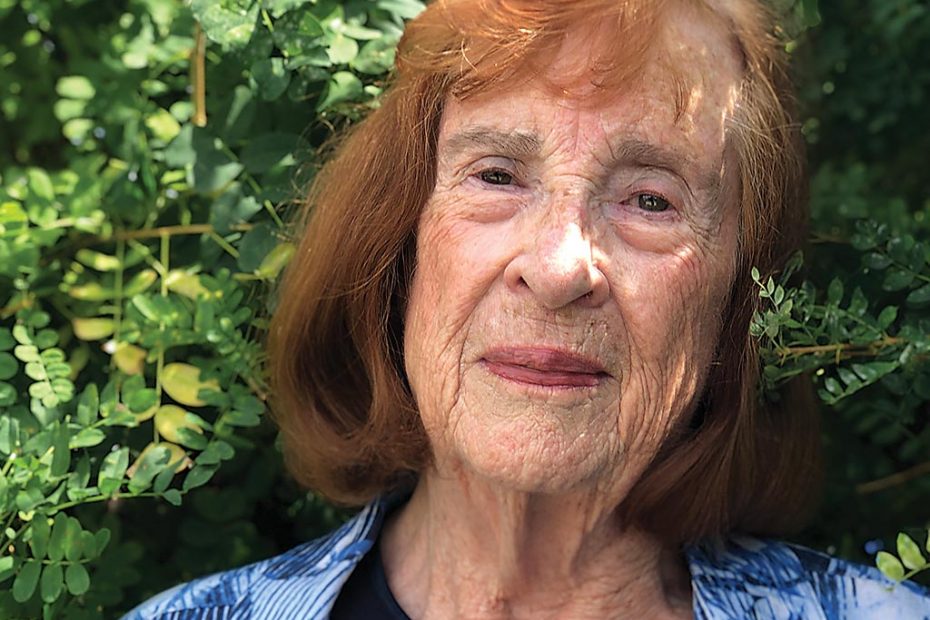 By Aaron Parrett
Sidney Armstrong is a Montana powerhouse. The daughter of Victoria Cooney and Richard K. O’Malley, (revered author of one of the Treasure State’s best books, Mile High Mile Deep), Armstrong has been a formidable force in the Montana community for more than five decades. Her fiery red hair, her witty eloquence, and the eternal gleam in her eye all speak to her Irish heritage, but her consummate cosmopolitan charm has always found expression in her service to Montana.

She attended Hawthorne School in Helena, on the historic upper West Side, in the 40s and 50s. After that she went to Helena High, but finished high school in Europe.

“When I was seventeen, my dream came true,” Armstrong wrote recently in an unpublished memoir. “My father and stepmother invited me to attend the International School of Geneva my senior year. I was very grateful, thrilled about the whole opportunity, and certain I would have a chance to visit Paris.”

Armstrong did get the chance to visit Paris, including a memorable tour of Notre Dame, and gained an international perspective on politics and citizenship. She joked that her life story can be summarized in three P’s: “Parenthood, Politics, and Philanthropy—that’s been my career.”
While raising four children (all of whom also went to Hawthorne school in Helena), Armstrong began volunteering in politics.  In 1960, when future governor Tom Judge first ran for the Montana legislature, he asked Armstrong to be secretary for his campaign, “I’d love to,” she said, “but I don’t even type.”  He laughed and told her she didn’t need to do any typing. “I just want your name on my advertising material.” He ran for the Montana house and won, ran for the Montana senate and won (and was elected president of the senate), and then in 1968 ran for Lieutenant Governor, which he also won, serving with Forrest Anderson. In 1972 he ran for governor, serving two terms, eventually losing a bid for a third term to his Lieutenant Governor, Ted Schwinden in 1980. Armstrong worked on all those campaigns and later had her first full-time job. “I served on his staff for eight years,” she said. “One of my responsibilities was to serve as (first lady) Carol Judge’s assistant, and she was involved in deinstitutionalization and community-based services for the developmentally disabled.”

While working in politics, Sidney was engaged in the struggle for civil rights and protesting the Vietnam War, participating in many marches and vigils in Helena. Her son Todd, now a Professor of Russian at Grinnell College in Iowa, recounted growing up during those active years. “Politics and philanthropy were part of our lived experience,” he said. “I think some of my first toys were paper clips and staplers. We had a picture of Martin Luther King on the kitchen wall, and we kids did our part, handing out brochures, that sort of thing.” He added, “My mother instilled in us a strong sense of the importance of civil rights.”

The Armstrong family interacted with international students attending Carroll College. “We had various students visiting us at different times, people from different cultures,” Todd explained, “so it was an eye-opening experience when I encountered overt racism later in life. I credit my mother with cultivating in all of us an open mind.”

Armstrong involved her children in all the community-oriented aspects of her life. “She was so supportive of our individuality, always invested in our independence, but that community involvement became part of my identity. I do what I do now because of how she raised us,” said Todd.
Sidney’s career in philanthropy arose out of her political work. “Tom made a comeback in 1988, running for governor, but lost a narrow race to Stan Stephens,” Armstrong recounted. “On the night of that 1988 election, after watching the results in the campaign headquarters down in the Lundy center, we finished the evening at Blanche Judge’s house, as we traditionally did.”

As she and the rest of the campaign workers absorbed the reality of defeat, a former colleague approached her. His name was Ray Dore. “Listen,” he told Sidney. “You’re not going to feel like it tomorrow, but let’s have lunch later this week. I have an interesting job proposal for you.”
“It so happened that Dore had been hired to be the director of the brand-new Montana Community Foundation, and at that lunch he asked me to be the Executive Assistant Director,” said Armstrong. “I thought, ‘what the hell—I don’t have anything else to do.’”

The Montana Community Foundation (MCF) has grown from its humble beginning as a statewide nonprofit with a modest budget to a permanent charitable endowment of $100 million. Armstrong proudly recounted the history of community foundations, which got their start as the brainchild a Cleveland, Ohio lawyer named Frederick Harris Goff, who discovered that banks often ended up in charge of trusts that had outlived their original purposes.  “Suppose someone has set up a trust whose funds are devoted to finding a cure for polio,” explained Armstrong. “To what use do you direct the money after a cure has been found? Community Foundations were formed so that if the original purpose of the donor was no longer applicable, the purpose could be changed to the benefit of the cause of organization closest to the donor’s original intent.”
From the Montana Community Foundation, Armstrong moved to the Greater Montana Foundation (GMF), which was started by longtime Butte radio and television entrepreneur Ed Craney.

In 2011, Steve Browning, who had been a founding member of the MCF, invited Armstrong to be on the board of directors for the GMF. She took over the helm as Executive Director in 2011.  Whereas the MCF is broad in scope and contributes to economic development for Montana families, the GMF has a more specific mission (“The Greater Montana Foundation benefits the people of Montana by encouraging communication, with an emphasis on electronic media, on issues, trends and values of importance to present and future generations of Montanans.”—from the GMF website). “Unlike a lot of grant-making organizations, GMF often gives funds to the same group, year after year,” said Armstrong. “They have to apply every year, of course, but for example, GMF funds Montana PBS every year. We primarily fund Montana programs, many of them well-known, beloved programs.” The list she rattled off included Backroads of Montana, Eleventh and Grant with Eric Funk, and the CM Russell documentary.

Now a proud grandmother to eight children and great-grandmother to one, Armstrong has compiled an impressive resume of Montana accomplishments. She shows no signs of slowing down, either, and you are quite likely to run into her at a political fundraiser, or a non-profit event, or perhaps the Helena Symphony. When you see her, give her a smile, and thank her for all she does for Montana. MSN