The Emerging Art Scene of Roundup

When Troy Evans was six years old, his family sold their family ranch, and the man who bought it had a son who happened to be a successful art dealer, specializing in Renaissance and medieval art. Evans became friends with this young man, developing a taste for art at an early age in a place one wouldn’t normally associate with art.

The family ranch was just outside Roundup, MT., population 1,800, the county seat of Musselshell County.

Now Evans lives on a smaller ranch that used to be his grandfather’s. There Evans built a studio, where he now produces incredible woodwork, sculptures,
and paintings.

His work is heavily influenced by Spanish medieval sculpture, as well as paintings from the Italian Renaissance. But for the most part, he is self-taught. He began with woodwork sculptures, and quickly developed a national reputation.

“I wasn’t even thinking about becoming a painter until the Montana Arts Council suggested I create some paintings, because most of my sculptures were selling for several thousand dollars,” he said. “They thought I would benefit from being able to offer some work that was affordable to more people.” He then created a series of 56 paintings he hung at a show, where they sold out. “I sort of accidentally became a painter,”
he said.

Evans is a sixth-generation Montanan, descended from a family that homesteaded just 30 miles north of Roundup in the Snowy Mountains. When asked what’s changed since he was a kid growing up in this rural community, he said, “All of the real cowboys are gone. Men like Wes Newton and Oral Zumalt. My grandfather was a world champion rodeo cowboy, and not only did I not know that until I was an adult, but my father didn’t know. We came across a photo one time that was of a bunch of rodeo champions in Madison Square Garden, and my father said, ‘Holy cow, that’s my dad.’”

Quality of life is what keeps Evans in Roundup, which is a common sentiment one hears among locals in small, Montana towns.

And that quality of life is what convinced his future wife, Coila Glass, whom Evans met through a friend, to relocate to Roundup.

A hairdresser from Texas, Coila moved to Montana in July 2005, and the couple married in September of that same year.

“We were such romantics!” she said.

But their connection inspired more than a romance. Coila had always dreamed of being a painter, but she’d always lacked motivation or confidence. “I even tried selling paintings out of my yard when I was a kid, but sadly, lemonade was more profitable,” she said.

Evans, however, could see she had natural talent, and he encouraged her. She took her first painting class in 2008, and something took. Over the next 10 years, Coila began a business doing massage therapy and occasional haircuts, but she was quietly working on her painting on the side.

In 2014, she bought a small building in downtown Roundup and converted it to a combined massage therapy studio and art gallery. In just a few years’ time, the Coila Evans Gallery has developed a presence. She now spends most of her time painting, with an occasional massage thrown in. 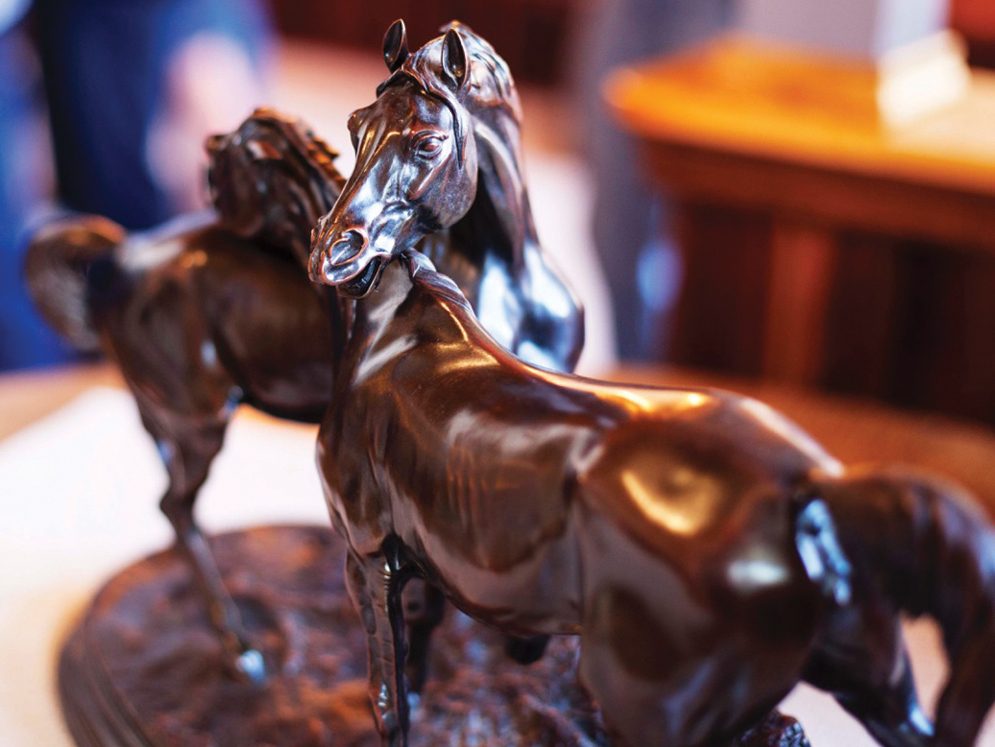 Although the gallery is only open by appointment, Coila hosts frequent openings and events, and because she has a naturally sunny and generous disposition, she has managed to attract some very talented artists to the gallery. She’s also fortunate enough to be living in a town that has a remarkable number of talented and nationally known artists for its size.

“There are at least five artists from this area that have a national reputation,”
Evans said.

Coila’s first show featured Michael Blessing, who grew up in Roundup, although he now lives in Bozeman. Blessing and his wife, Megan, are both very much in demand for their work.

Coila also features work by local artists Gregory Wilhelmi, Joe Trakimas, and Mary Peters, all of whom are well-established. And, of course, her husband. The gallery has also featured works by other developing Roundup artists, like Angie Sellars, Dan Palagyi, Dolly Boyd, Anastasia Swarthout, Gloria Mang, and Tana Ray.

And what has all of this done for the town of Roundup? That’s always hard to quantify, of course. But when Coila invited me to do a reading at her gallery a couple of years ago, I anticipated a handful of people, based on my usual experience with towns of this size. I was very pleasantly surprised when more than 20 people crowded into the small-ish gallery, almost all of them local.

I also attended another event at the gallery, a show that featured skulls. Some of the works were paintings of skulls by the Blessings and Billings artist Jodi Lightner. Some three-dimensional pieces featured real bird skulls by Amber Jean, a talented artist from Livingston, who recently spent several months in Bhutan doing wood carvings for the king. And most notable were the beautiful painted skulls of another Billings artist, Jennifer French.

Having lived in small towns, it’s not hard for me to imagine how some of the people probably view the Evans and their little gallery. People probably consider them a little “different.”

But another thing that’s fabulous about towns like this is that they embrace the different folks, and with Coila and Troy, it’s not hard to imagine why.

Aside from Evans’s long family history (his father served in both houses of the state legislature and was active on many boards), the couple brings a positive energy to this small town that’s infectious.

When asked what she likes about living here, Coila provided a very long list.

“I love that when I’m driving down the road after dark, I get a text the next day from a client, letting me know my tail light is out,” she said. “I like to know my vote counts. I’ve worked as an election judge, and witnessed a person losing by six votes. And knowing the Arcade Bar is simultaneously receiving election updates via phone, and keeps track on a giant chalk board, marking the wins for the local and state. When a local wins, he or she rings the locally made artisan bell, buying the bar a round of drinks.

“I also love that when I got married, my friends were on the side of the road picking flowers…someone stopped to make sure they were okay. My friends decided then, ‘This is a Coila kind of town.’”