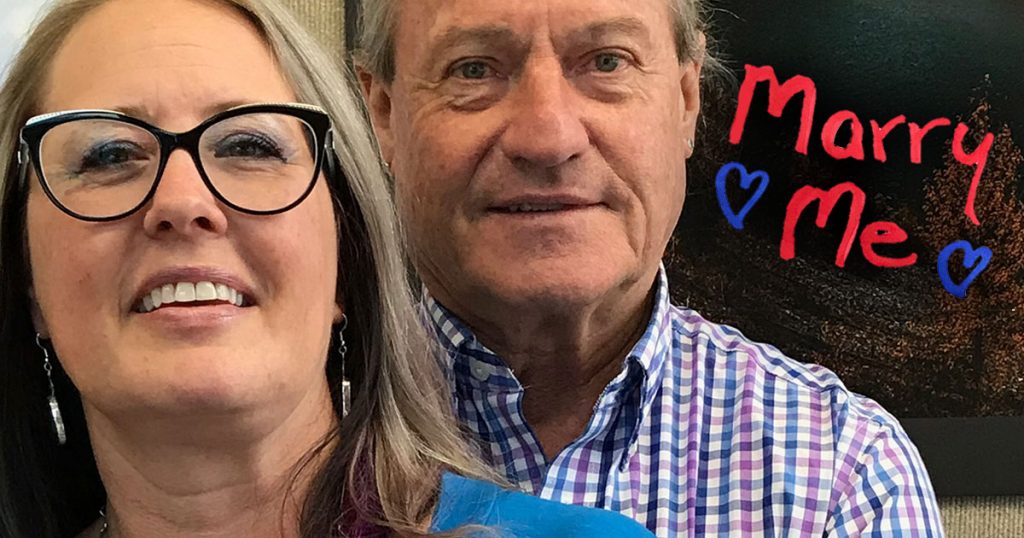 For deplaning passengers at Glacier Park International Airport one October night, that very public proposal, complete with a bouquet of red roses, elicited smiles and high hopes for the suitor. What happened next, though, made the scene even more special. When the woman for whom the sign was meant drew closer, the man lowered a second sign inscribed with just one word, “Again.”

The man turned out to be the current Montana Poet Laureate, Lowell Jaeger. The woman was none other than his wife of 20 years, Amy.

“My heart was overwhelmed with how sweet this was of him to do,” recalled Amy, who was returning from a trip to Colorado that evening. “I just kissed and hugged him and said, yes, you bet, absolutely!”

A few months prior, the couple had considered renewing their vows in front of friends and family, to celebrate their 20 years together. Fifteen years earlier, they had done that very thing on a Mediterranean cruise and looked forward to a future renewal.

However, unexpected family obligations kept it from happening this time around. Instead, Lowell did the next best thing. He hand-wrote and decorated two signs, bought some roses, and took them to the airport that evening. And if that wasn’t surprise enough for his wife, chocolate pie and whipped cream awaited her at their Bigfork home.

Aside from being Lowell’s bride and best friend for two decades, Amy is also his partner in adventure. Whether the dream takes them to Mexico for the Monarch Butterfly migration or along Big-sky backroads visited more by critters than cars, she’s on board wherever the journey leads. Should they get lost or get a parking ticket, it matters not to either of them.

“We work together really well. If one of us makes a mistake, we roll with it,” noted Amy. “You don’t want to damage the spirit of someone you love because he made a wrong choice. That just makes the person feel so much worse. A bad decision isn’t the end of the world.”

Another favorite pastime for the Jaegers is reading a book aloud at home together or when Lowell is seated behind the steering wheel.

“She reads; I listen; and then we talk,” said Lowell, an English professor at Flathead Valley Community College for over 30 years. “There’s a deeper connection through reading aloud than with an audio book. We pay more attention, and it generates conversation. It gets us both involved, for sure. Amy has read us classics like Moby Dick as well as contemporary fiction, such as All The Light We Cannot See. It varies a lot.”

They considered Five Love Languages so enlightening, they want to read it again. It helped them realize that people experience and express love differently. Gift giving and doing acts of kindness are two of those five languages. The former is often Amy’s way of showing affection while Lowell’s is the latter.

“We have learned—and are still learning—to work at never letting romance fade with time. We’ve struggled like everyone,” admitted Lowell.

“You’ve got to keep romance in the forefront of thought of what’s important,” added Amy. “Lowell is definitely a romantic. He cooks me dinner almost every night, lights the candles, and has music playing. He checks to see what level I’m at after coming home from work and thinks about what we might want to do as a couple afterwards.”

While Lowell likes to putter in the kitchen, hand forge gold and silver jewelry, and compose poems that capture significant moments, categorizing the book titles in his library or balancing his checkbook would not be how he’d choose to spend a free afternoon.

“I love to inhabit my airhead space and be wonderfully unstructured,” he confessed. “That could be chaos, but Amy brings tradition and structure to us. She’s the organizer, planner, and manager of our finances. She remembers anniversary and birthday dates. I wouldn’t have the space to be myself, the romantic side, if she weren’t caring for all these other things. That’s taking care of you. And I find that very romantic.”

“We bring opposite strengths to the relationship,” noted Amy, who describes herself as “detail focused and task oriented.” Undoubtedly, maintaining a sense of order in their home comes more naturally to her than to her husband. An example of their different thought-modes that especially tickles her is a long-ago dinner at Lowell’s home when they began dating.

“He asked me to get a can of green beans from the pantry. It was so full of things, I couldn’t find the beans. I asked Lowell where they were, and he told me the cans were alphabetized,” laughed Amy. “Of course they weren’t. That was something I’d have done, but not him. It was just his sense of humor coming through.”

One axiom this couple understands is that you sometimes have to forsake familiar patterns of behavior that no longer work for you in order for a relationship to grow. As Amy said, “You gain and learn as you do. But you gain nothing if you don’t try.”

Their willingness to take risks stems back to the time when they met, and Amy was one of Lowell’s students. Both had been married previously and knew that getting involved might be unwise because of past emotional baggage. In addition, they were each single-parenting young children. But a strong mutual attraction and the ability to talk to each other as equals about most everything overrode any hesitancies they may have felt about their compatibility or age difference.

Although he may have perceived childlikeness as a possible weakness, to Amy it was a strength because she had always approached life seriously. Lowell’s sense of playfulness, so obvious in a classroom setting, released a new way of thinking for her.

“He taught me to access my creativity instead of just thinking about work and the future. His teaching style made me focus on what I was doing and not on the grade,” recollected Amy. “I was playing with a whole different part of my brain and loved it.”

Like all couples, the Jaegers have faced their share of challenges, including times when they didn’t communicate especially well with each other. But they have always kept going forward to figure things out, and that has made their bond all the stronger.

“We’ve learned what hurts one another and try not to do those things anymore. We know there will be an opportunity to mend a fence if we’re patient,” said Amy. “It takes the priority of remembering that life without this relationship wouldn’t be as rich as it is with it. You give up something to get something.”

Considering their zest for adventure and willingness to take risks, it makes sense that this twosome would see marriage as the biggest adventure of all.

“Marriage is a learning by doing. It never ends,” stated Lowell. “Relationships require constant effort, but the payoff is worth it. In the end, human relationships are all you’ve got. There is nothing else.”