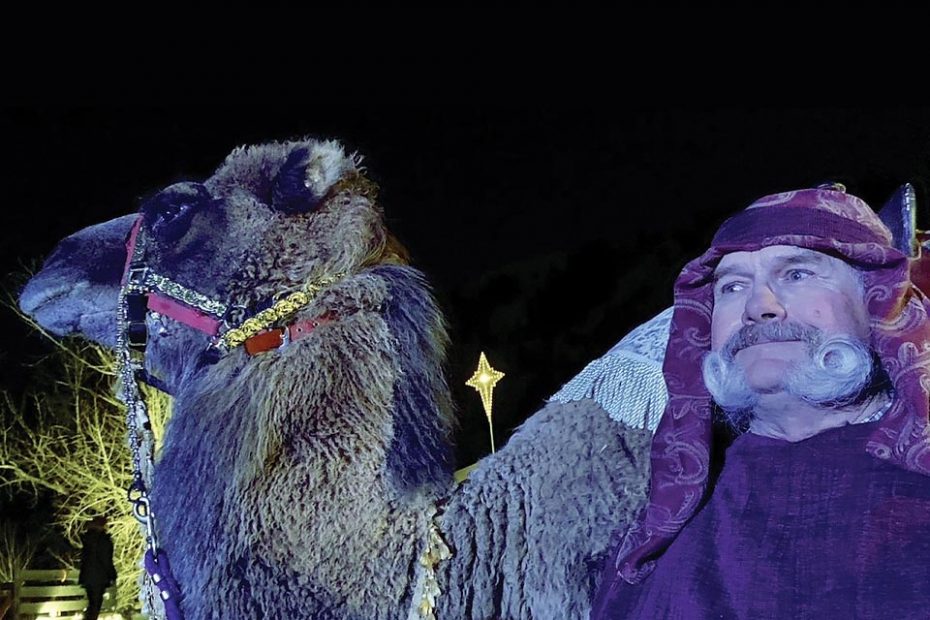 Even the camels and donkey sense the reverence of their roles at a nativity re-enactment, according to their owners, Jeral and Jenine Williams. The eastern Idaho ranchers and their family host a popular live nativity the second Monday of December near Ucon, north of Idaho Falls.

Throughout December, they also lease out their four-legged family members for nativity productions in southern Idaho and northern Utah. Wherever they go, Jenine said their donkey with Mary and Joseph and the camels carrying the wise men become majestic and proud while performing their roles.

“It’s like they know it’s an honor to participate and do their part to tell the story of Jesus’ birth, the greatest story ever told,” said Jenine, 68. “No matter how many times I’ve seen it, I always feel a sense of peace at the nativities. It’s the best feeling ever.”

She said before a nativity re-enactment starts, people love visiting with their livestock and petting them.

“At the beginning, everyone is chattering away, socializing, and laughing,” Jenine said. “Then, when the program starts, and Mary and Joseph come out of the darkness into the light, the crowd becomes silent. You think of the hardships and joy Mary and Joseph must have felt when Jesus was born. It’s really humbling to think about Jesus’ birth in those circumstances. It gives everyone goosebumps, and there are tears for some people.”

Participating in live-nativity programs is rewarding for the Williams, who raise cattle near Ucon. Several years ago, they provided animals for a nativity their son helped organize, then mostly by word-of-mouth and their Facebook page, Camels R Fun. The annual event began in 2018, drawing as many as 600 people.

Other nativity organizers began asking them to bring their donkey and camels to other celebrations in the region.

Jenine provides period outfits she’s sewn for those who need to borrow them.

“Having animals at a nativity program brings it to life,” said Jeral, 69. “When people watch our animals come in, they say they feel like they’re in Bethlehem, and it’s easy to imagine what life was like in Jesus’ time.”

Last December, they hauled their animals to 21 productions.

“With the coronavirus this year, some people have canceled,” Jeral, 69, said. “We hope it will be back to normal next year.”

They are planning to do their family tradition—a live nativity with physical distancing and sanitation protocols in place—at their son Jake’s home near Ucon, the first Monday of December. After the re-enactment, celebrants will linger and mingle around bonfires while sipping hot chocolate and eating cookies.

Jeral said he bought his camels “just for fun” 12 years ago after finding some listed on the internet under exotic animals. They joined his cattle and white bison.

“Our camels are gentle,” he said. “When people stop by, they always come up to visit.”

The Williams have also taken their camels to birthday parties, parades, schools, holiday events, and to a summer camp for children with cancer.

At the Christmas season, the camels’ playfulness seems to be replaced with reverence for their nativity roles.

Jeral said the programs are comforting “and could do a world of good with the pandemic and how afraid some people are. It’s enjoyable for us to share our animals and bring to life the message of the nativity.”

At the end of nativity productions, Jenine said, “People are smiling. You can tell they feel the joy of Christmas.”

Montana churches as well are sharing the peace of the Christmas season with popular live nativity productions.

“In these times of unrest with the pandemic and presidential election, it’s comforting to know there is the peace of Jesus’ love in our lives,” said Brad Hooley, family pastor at Family Life Christian Center in Kalispell. “Our motto here is ‘Love Better.’ We strive to love people for who they are and give them hope.”

Meanwhile in Havre, the Van Orsdel United Methodist Church’s live nativity will be December 5, from 7 p.m. to 9 p.m., going through the alley behind the church at 410 Fifth Avenue.

Organizers for all Montana events are planning to have social distancing and sanitation protocols in place.

“Hundreds of people come every year,” said longtime coordinator and church member Ray Toth, who plays the role of one of the wise men or Joseph.

The production has been a tradition for more than two decades.

“It’s really meaningful to those of us in our roles and spectators alike. No one speaks as our guests take it all in,” Toth said. “It’s tremendous.”

Church secretary Edna Gregory said, “It’s a perfect way to start advent and a reminder of the reason for the season. It’s a spiritual centering experience and gives a sense of peace to participants and viewers alike.”

Along with church members, sheep, a llama, and donkey participate.

“One donkey has been with us every year,” she said. “With our live animals, backdrop and lighting, and music playing softly, it’s a special time and place. We even have a few snowflakes some years.”

An illuminated angel, standing in a scissor lift, hovers with outstretched arms to welcome celebrants.

“It’s a very reverent evening and our longtime gift to the community,” Gregory said. MSN