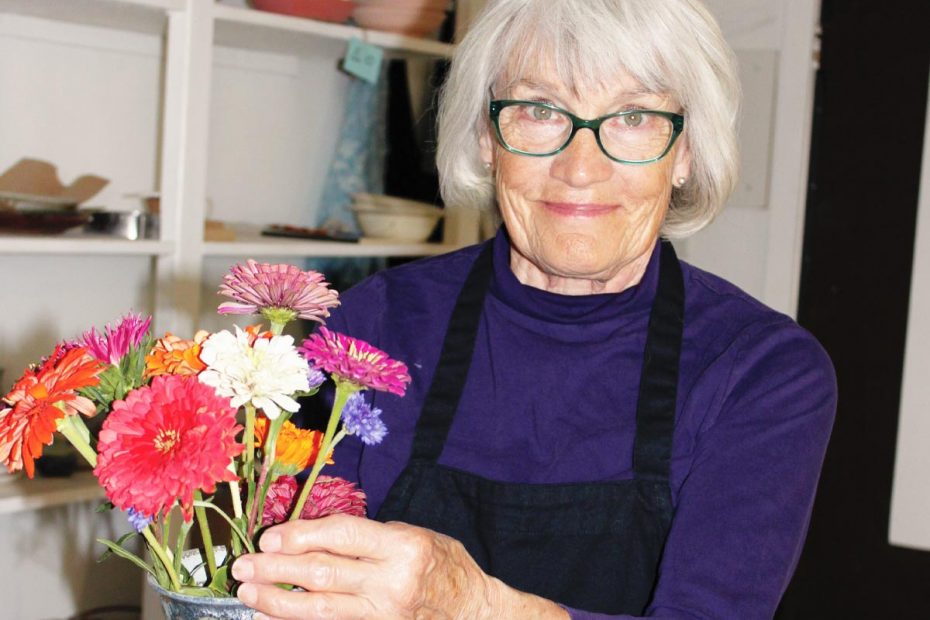 Judy Ericksen, 78, has clocked many volunteer hours and has made a significant impact on her community. She came to Great Falls, Mont., with her husband, Joel, from Minneapolis in the 1960s, and she has been working in the community since.

In 1966, during a clay-handling workshop, the instructor asked if anyone wanted to turn some clay on the potter’s wheel. Judy did, and the first time she tried it, she knew that working with clay was what she wanted to do as her creative bent.

Since then, she has become an award-winning potter. To benefit the community, she has often donated her art work and lessons for non-profits to auction at fundraisers.

Teaching at the YWCA led to helping that organization with a money-raising event called “Empty Bowls.”

The general public addresses hunger and poverty in the community by taking part in a money-raising luncheon of soup served in hand-made pottery bowls that become theirs to take home.

Ericksen had made 150 bowls each year for the event, until the year she fell on some stairs and broke her wrist. Other potters in the community stepped in and finished making the bowls. She is now among this group who make the bowls for the event each year.

Twenty-one years ago, Ericksen sat in a meeting concerning the jail ministry offered at the county incarceration center. Kathleen Cane, a catholic nun, who was overseeing the project, said she was leaving the state, and that the program providing reading materials to inmates would be discontinued. Ericksen had previously given art supplies to the program, but as she sat there, she felt she could do more; she could help with book distribution.

When she and a few others started out, they found they had to invent the program. Because of security, they realized that the books had to go to the inmates in the different cell blocks instead of the inmates coming to a library. Although there is no budget for this program, donations led to building carts to hold the books.

The local chapter of The American Association of University Women who hold a book sale every year were, and continue to be, extraordinarily good to the program with books that fit the criteria set by the incarceration center.

“I can’t think of anything that would help people do better in their lives than become a better reader,” said Ericksen who continues to oversee this program.

“When I attended conferences on prison populations, I learned that across the country three out of five prisoners have reading limitations,” said Ericksen. For that reason, easy reading for those who are attempting to improve their reading skills is always available on the book carts.

Earning a GED becomes a priority for Montana State inmates because that is often one requirement for their release. Ericksen helps them with materials to study for the GED exam.

Learning that recidivism is lower when inmates have connections with their family, Ericksen and videographer Carol Gamell have worked with detention staff to initiate an opportunity for inmates to read a story for their families at Christmas time. Ericksen decorates a room with Christmas wreaths and ornaments, and she provides shirts that are different from the prison uniform.

“We always bring tissues because someone, including the inmates, tears up.” The video tape is professionally edited and then sent to the family along with the book that has been read.

Ericksen was instrumental in developing FISH, a food pantry program that distributes food to people in need. Thirteen churches and one service club run the Great Falls program. Ericksen continues to help with its annual fundraiser dinner.

A parent whose son had war injuries called Ericksen to see if she knew someone who would teach him to work with clay. His occupational therapist thought he would find it helpful. She immediately said she would be willing to try it. After she finished the conversation, she thought to herself, “I don’t know how to do this, and I don’t have the equipment needed.”

The first thing she needed was a stab roller. “I kid you not, a few days later an acquaintance who was cleaning out her equipment and supplies backed into the yard and pulled out a large stab roller and asked me if I could use it,” said Ericksen.

Next she told herself it would work better to have some molds on hand. Not a week passed when a friend called saying a move to another state precipitated the need to clean out her pottery supplies and offered Ericksen some molds.

“People may not believe how this happened, but it was providence that I should have those items on hand when the veteran, along with his occupational therapist, came to learn to work with clay.” She has been privileged to help several veterans since then. MSN