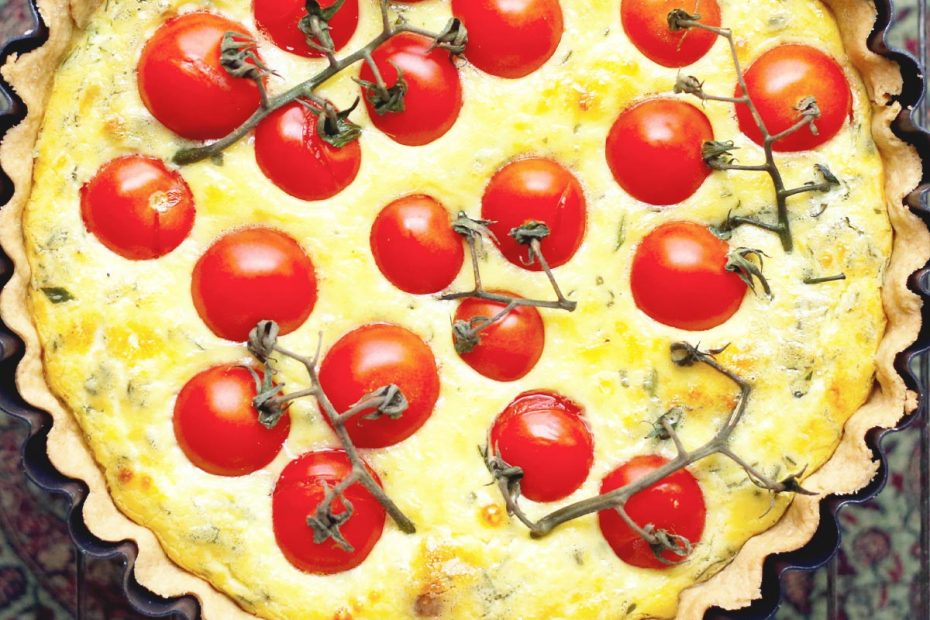 Custard is good. Pie is good. Custard pie? Custard pie is quiche, and quiche is really good. That’s all you need to know. Nevertheless, you have questions, such as, “Is quiche French?” The answer is no.

Well, it’s complicated. Stay with me. There’s a roasted garlic and tomato quiche recipe in it for you.

The Wikipedia entry for quiche, which I suspect was written by an English person, notes that the English were eating custard pastries as early as the 14th century. So, is quiche English? No.

First off, a creme-filled donut is a custard pastry, but it ain’t quiche, know what I mean? Also, if quiche were English, it wouldn’t be called quiche. With disturbing English food naming conventions, it would be called “clotted eggy tart” or something disgusting like that. In 14th century Middle English, that would be “goode cloted egge teart.”

A stronger case can be made for quiche being German. This is based on etymology.

The word “quiche” is a French corruption of the German word kuchen (cake). Take that, French persons!

It gets its name from Lorraine, as in Alsace-Lorraine, a region on the western edge of France. So that makes quiche French, right? Not so fast!

Alsace and Lorraine were once regions within the Holy Roman Empire, and many of the people who lived there spoke German (Germany hadn’t been invented yet). French royalty liked to think of the Rhine river as a natural border for the Kingdom of France, so in the 17th and 18th centuries, they annexed all of the land west of the Rhine, including Alsace-Lorraine. Charles III, Duke of Lorraine, had already been singing the praises of Quiche Lorraine in the 16th century. That means the quiche was already waiting when the French got there. Suddenly Alsace-Lorraine, and quiche, were French.

But wait! There’s more! Eventually the Franco-Prussian War came along. The Prussians (proto-Germany) won, and in 1871 the Kingdom of Prussia annexed Alsace-Lorraine. Suddenly Alsace-Lorraine, and quiche, were German.

But wait! There’s more! Eventually World War I broke out. Eventually Kaiser Wilhelm was defeated. Just before the end of the war, the German navy mutinied, trade unionists joined them in solidarity, and they had a short lived socialist-inspired November Revolution in Germany. During this brief mayhem, on November 9th, 1918, Alsace-Lorraine declared its independence and became The Soviet Republic of Alsace-Lorraine. Seriously. Suddenly quiche was the quiche of the industrial proletariat.

A few days later (yes, days) the French rolled in and re-annexed Alsace-Lorraine. It’s been part of France ever since. While the French aggressively “Francofied” the region (they kicked out the Germans and forced everyone to speak French), they still eat sauerkraut and sausages in Alsace-Lorraine, which is pretty German.

Of course, quiche is still there too. MSN