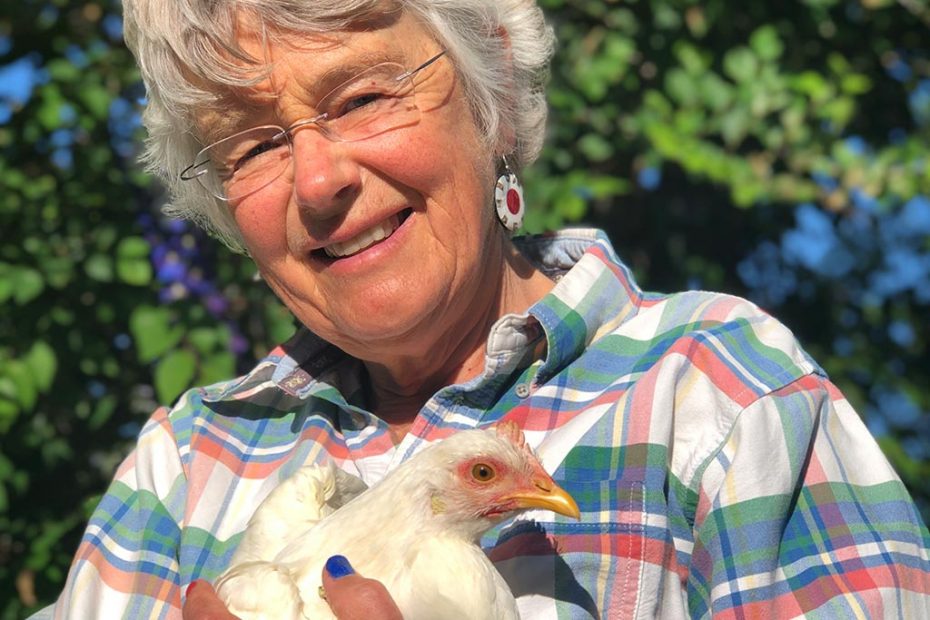 So … why did the chicken cross the road? Michelle Andrews grins and asks me the timeless riddle as her backyard chickens serenade us with soft clucks and peck under her rose bushes. Oodles of one-liners come to mind. If you’re Colonel Sanders, you’d say, “What, I missed one?”
“They don’t cross the road—not mine anyway,” Andrews says. “They always stay in the yard for some reason.” We cackle at her improv punchline.

Chicken humor abounds at Andrews’ home in Inkom, a town in southeastern Idaho.

“When you have chickens, your friends and family give you all kinds of chicken gifts.” Her daughter gave her a plaque, Chicken Coop Rules. It hangs in her kitchen and offers daily reminders to stay positive. No brooding. No fowl language. Cackle daily.

“The girls make me laugh, watching the way they run and behave,” she says of her Speckled Sussex, Golden Comet, Americana, and Buff Orpington. “Our grandkids love feeding mealworms to them. I understand firsthand why there are so many sayings about them—being a chicken if you’re afraid, being hen-pecked, and having a pecking order to show dominance.”

While some backyard chickens seem like stand-up comedians, there is a serious side to the increasingly popular trend of tending to a fluffy flock in town. Poultry provide a dependable food source, entertainment, and lawn fertilizer or fodder for a compost pile.

Cities have different guidelines about keeping backyard hens and may charge a minimal fee per bird.

During the onset of the Coronavirus pandemic in spring, chick sales soared at farm stores when some consumers feared grocery stores would run out of eggs.

Some enthusiasts failed to understand that the lag time between cute chick and becoming a dependable egg layer can be up to 18 weeks.

“We never worry about food shortages. We know we can count on the girls,” Andrews says. “We like eggs fixed all kinds of ways—breakfast burritos, hard-boiled, egg salad sandwiches … If we get too many eggs, we give them to friends.”

During summer, her chickens lay a total of about nine eggs a day, while in winter it might be two or three. “They’re really affected by the amount of daylight,” she says.

Andrews, 54, started her backyard flock two years ago as a hobby she had always wanted to pursue when she had the time. A biologist, she retired from running a research lab at Idaho State University, and turned to the Internet for poultry pointers.

Meanwhile, her husband, Jeff, built her an insulated coop to protect the girls during winter.

To make it easy to gather eggs, she bought roll-away nesting boxes, so the eggs gently roll out of the nest to a nearby collection site.

“They’re so proud when they lay an egg,” she says. “They have an egg-laying song. It’s a series of short clucks followed by a long and loud screech. Sometimes they’ll lay eggs in the yard, so you feel like you’re on an Easter egg hunt when you find them.”

After she lets them out of their backyard coop in late morning, they follow her around when she does yardwork.

While they explore the yard, Andrews cleans their coop, scooping away droppings. She prefers large wood shavings for bedding and diatomaceous earth to repel mites.

She advises wearing different shoes in the coop than in her home.

“Chickens live with salmonella,” she says. “I’ve never been sick but make sure to wash my hands after being in the coop and leave my chicken shoes outside.”

The girls’ eggs not only feed her family, they nurture Andrews’ creativity. She has done pysanky, the Ukrainian art of decorating eggs with dyes and wax.

“I’m enjoying the girls more than I ever thought I would,” she says.

“My friend’s grandkids used to love to catch grasshoppers for my flock,” says Peters, who paid them a nickel for each insect. “The chickens go wild for them. They’re hilarious to watch.”

Her girls are Rosemary, an Isa brown; Sonya, a Buff Orpington; Shirley, a Silver Laced Wyandotte, and two light Brahmas, Betty and Wilma. They roam her yard during the day, offering comic relief for Peters, 62, an employee at Montana State University—Billings, who works from home.

“When I need a short break from work, it’s nice to walk out and see what they’re up to.”

Some of her chickens have been unforgettable.

“When my mom was alive, she’d sit in a lawn chair, and Clara would fly up and nestle into her lap.”

Another bird, Blanche, a white leghorn, did anything for attention.

“It wasn’t a great idea to walk in my yard if you had shoe laces. She untied them and pecked at you until you picked her up and told her she’s beautiful.”

Nine years ago, Peters began raising chickens by default. “Someone needed a temporary home for her chickens while her house was being painted. She never came back for them,” she says. “I realized I liked having them around for bug control and my compost pile. I was surprised that the fresh eggs really are more flavorful than what you buy in the store.”

“Some people get chickens without realizing their habits and decide they don’t want to keep them. They’re tough on flowerbeds and scratch and scatter dirt into the yard,” she says. “Some people get tired of picking up the poop, too. I don’t mind. I put it in my compost pile and use that to grow big, sturdy tomato plants.”

Grateful for her girls, Peters provides them with treats: black soldier fly larva, mealworms she purchases on Amazon, and a free choice feed block for chickens.

Knowing her girls dislike winter, she had a sunroom built for them. Her coop is raised, so she had Plexiglas placed around the coop at the bottom, so they can be outside on sunny days in winter and still have some protection from wind.

“I’ll always have chickens,” Peters says, “but I’ll never eat them, because, to me, they’re pets.”

Chicken Run
While Peters allows her flock to roam the backyard, Ann Wilsnack and her husband, David Orndoff, of Helena, Mont., put their chickens in a coop inside a roomy, 25-foot-by-50-foot run along a side of the yard. Orndoff and their son built the coop and fenced off a run in 1987 when they started raising chickens for eggs and meat.

“They’re all characters and have personality,” says Ann, 70, an artist, of their white leghorn flock: Siren, Lilly, Ruth, and Daisy. “When the pandemic got started, it was comforting to be around the chickens—to watch something alive and unworried about the world.”

Once her young leghorns begin to lay, probably in August, she expects they will give about six eggs a day.

“It’s nice they’re omnivores, because we can feed them table scraps or dried up bread.”

She advises people who want chickens “to go for it” and offers tips. When they get chicks in spring, she and her husband hold them, so they become accustomed to being around people.

To help the chicks transition to living outside, they put them in a playpen in the grass during the day and back inside the house in a box at night.

“Our neighbor’s child next door got a lot of pleasure out of hanging out with the chicks when they were little,” Wilsnack says. “Make sure they have clean water and food and keep them safe—away from hawks and dogs.”

When the chickens no longer lay eggs, they are harvested after Thanksgiving.

“We like to pressure cook the meat and make soup,” she says. “It’s a good comfort food in winter.” MSN