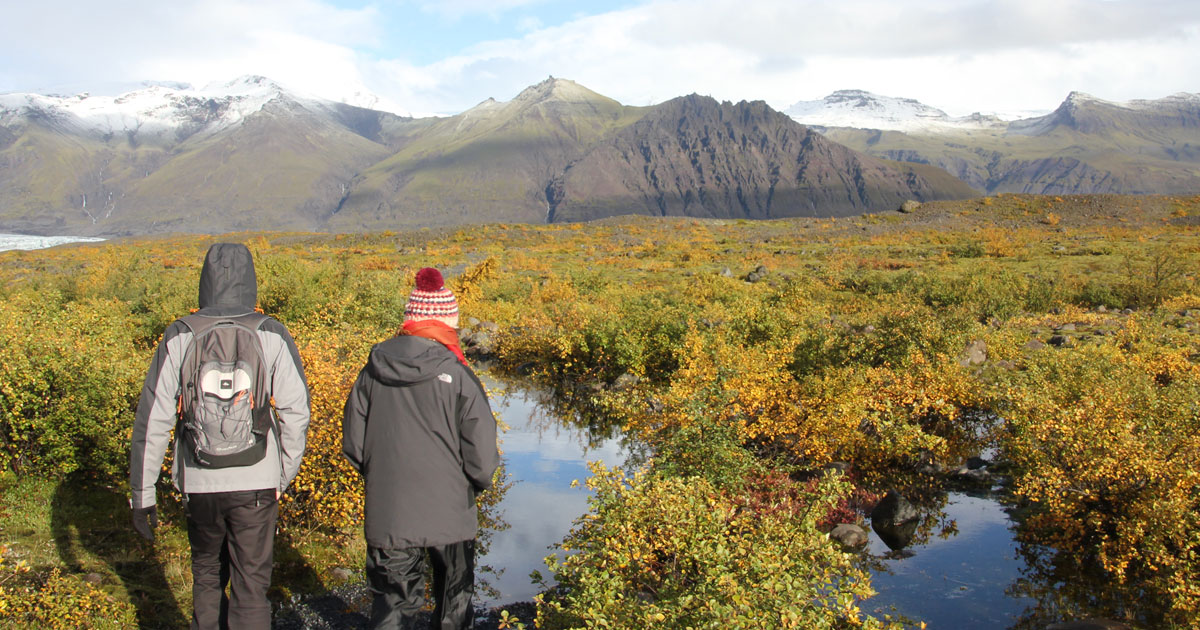 Iceland is known for its natural beauty and was on my bucket list. The United States Tour Operators Association named the country in its list of top 10 destination fads for 2017. This island of 39,768 square miles with a population of under a half-million has plenty of space to absorb curious travelers.

With flights from Portland, Seattle, and other U.S. cities, Icelandair makes it easy to experience Iceland, allowing a free stopover for up to seven nights with flights across the Atlantic Ocean.

Available since the 1960s, the stopover is included at no additional cost to your airline ticket price. WOWair also offers a free Iceland stopover on round-trip flights going from U.S. cities to Europe.

This past September during Iceland’s shoulder season, I took advantage of an Icelandair stopover on my return flight from Germany to Seattle. We flew to the Keflavík International Airport (KEF) near the capital city of Reykjavík. Two of us rented a small, fully-equipped camper van from Kuku Campers. Several companies offer larger campers for rent.

Our mission was an eight-day drive around the island on the Ring Road. This 826-mile paved road is ideal for viewing Iceland’s famous scenery. On the way we stopped at numerous waterfalls, ocean beaches, and quaint towns, spending nights in campgrounds and undeveloped sites.

We took a thousand photographs of glaciers, rivers, mountains, lava rocks, and autumn leaves along the way.

One night we camped with views of the ocean while parked beside a glacier next to a river. On the Golden Circle driving route, we spent a night at a campground in a pasture near the Strokkur Geyser in the Haukadalur geothermal region. Along the north side of the island we slept on a high point at a roadside pullover area with the ocean spread out below us.

Visiting waterfalls, such as at Goðafoss (Waterfall of the Gods), is a favorite stopover activity in Iceland. Photo by Natalie Bartley.

Later in the week, we experienced the healing geothermal waters of a community recreation center’s swimming complex. Another campground, located at a golf resort, featured hot tubs facing a mountain.

Icelanders take geothermal pool sanitation seriously. The facilities require thorough showers prior to entering, and one city facility even had attendants checking that everyone complied.

Our last night outdoors was at a campground near a lighthouse with the northern lights peeking out occasionally.

Even though I love watching wildlife, I admit the sheep and Icelandic horses stole my heart. Fluffy white sheep dotted the green fields. Horses with punk-rocker hairstyles strolled over to fence lines to meet us.

Last autumn, some of my friends heading to Europe stayed in the capital town of Reykjavík. They raved about the local organic farm-to-table eateries and beautiful waterfalls. Sue Allison, a Boise resident, visited on her way to Germany.

“Probably my favorite thing about Iceland was how environmentally focused and friendly the country is,” she said. Allison liked their emphasis on organic foods and gardening, and noted the premium quality dairy products.

Visitors with only a few days for a stopover generally base out of Reykjavík. In town are bicycle, beer, and food tours. Travelers can easily access the Blue Lagoon geothermal springs on the way to or from the airport.

Shannon Page of Boise spent two days in Iceland on her way to Germany. “Don’t make the same mistake I made and schedule too little time in this amazing country,” she said.

A three-night stay allows for tours to waterfalls and geysers along the Golden Circle route near Reykjavík. Longer stays permit renting a car or camper and exploring further afield. If you want to whale watch, sea kayak, or take a helicopter ride, visit the Icelandair and WOWair websites to book these and other tours, or book a tour once you arrive in Iceland.

Tour buses transport passengers to all parts of the island for scenic views or overnight stays in luxury hotels.

Icelandic horses are common and often approach the fence line to serve as willing photo models. Photo by Natalie Bartley.

Budget-conscious backpackers and van campers have plenty of options with hostels, and home stays on farms offer an intimate look at the sheep and horse cultures.

If you saw the Icelandic scenery in the 2013 film The Secret Life of Walter Mitty, you might recognize the movie locations during your travels in Iceland. Games of Thrones filmed scenes in south Iceland.

The busiest tourist season is June through August, with endless daylight and lots of festivals. Bring a rain coat and warm clothing for the constantly changing weather. The island is an expensive place to travel since food and gasoline prices are high, so carry credit cards, ATM cards, and cash.

We found the Wi-Fi reliable and readily available throughout the country at gas stations, restaurants, and campgrounds. Iceland has high-quality tap water, so we only needed bottled water for camping at the undeveloped sites.

Although the country’s designated language Icelandic (a North Germanic language), English is widely spoken. It is part of the Germanic language family. Road signs can be tricky because place names are sometimes spelled in various ways.

Our week-long driving tour through Iceland was a teaser for what the island offers. I am eager to return to for an in-depth exploration in the backcountry beyond the roads and waterfalls.