A Mission for Dog Walks: Let the Pooch Decide 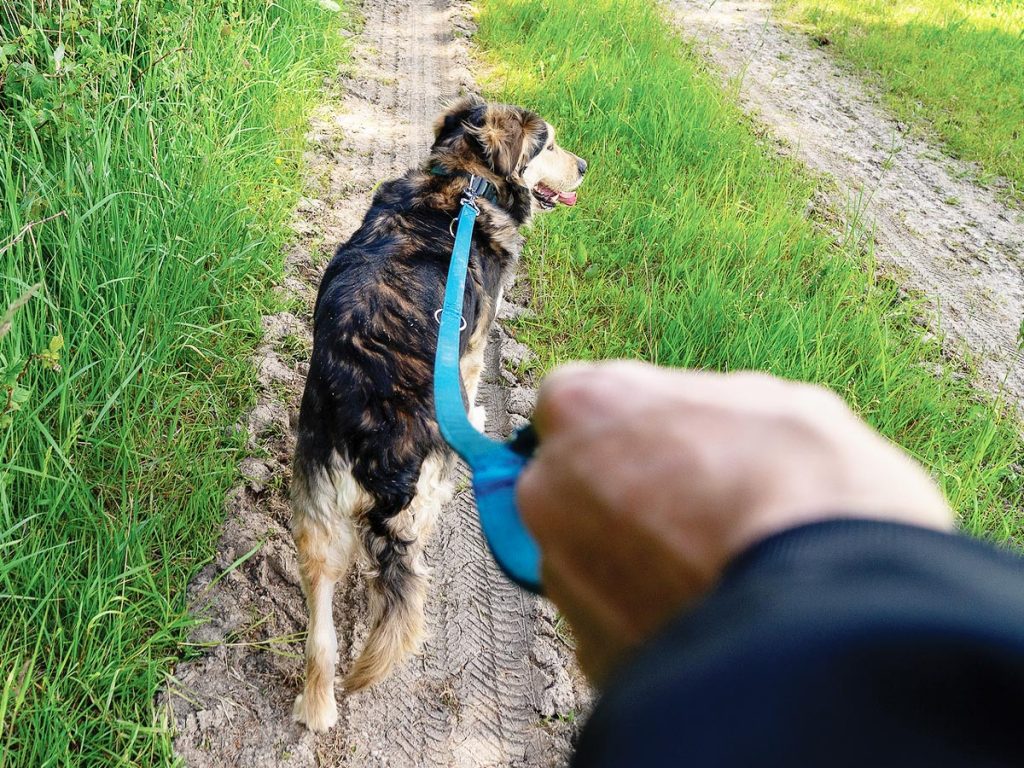 (SENIOR WIRE) What happens when you combine Ray Bolger in The Wizard of Oz with a pileated woodpecker? Give up? You get John, who long ago walked his miniature Doberman pinscher along the street where my wife Kathy and I resided for 14 years.

John was bald and sinewy, with a nose that could have poked holes in bark. His appearance was less remarkable than the way his min pin walked him, for that was the fact of the matter. In defiance of all obedience training wisdom, this guy tied the dog’s leash to one of his belt loops and went along for the drag.

Picture this. The Zwerpincher, as the Germans have dubbed it, led John hither and yon up the boulevard, and he followed without complaint. It was as if master and quadruped had switched roles. I never learned the dog’s name or gender, but from here on I’ll call her “Toto.” (Trivia: “Toto” was the Oz name for “Terry,” a female Cairn Terrier.)

I spent many hours on the porch in those days, reading, writing, and thinking. Even as a much younger man, I had a sneaking admiration for John. No doubt about it, he had not only figured out, but put into practice, the solution to a conundrum that had me stumped until recently.

The drawback to John’s leash-to-pants method was that he looked ridiculous. Left to their own devices, dogs can rack up seven miles on a pedometer and have traversed only one linear mile. And it’s not as though the pace is even. A neighborhood’s odors, alarms, and obligations require many stops and starts.

John’s legs weren’t all akimbo like the Scarecrow’s, but Toto took him from tree to sidewalk to curb to street to hydrant, in a relentless zigzag. He may as well have been trying to chase down a chicken.

But so what? The instant you feel yourself being tugged forward at the waist by a tiny dynamo whose legs are as speedy as Woody’s beak tapping away, you’ve practically dared onlookers forever after to call you “weirdo.”

This is exactly why I remember John so fondly. First, his inner-voice must have said, “ha ha ha ha ha” to what other people thought. Good for him. Second, he understood the purpose of walking a dog.

Until yesterday, I possessed understanding but lacked acceptance. A lifetime of pet dogs—from Dutch to Bandit to Daisy to Watson to our current resident, Sherlock Holmes—have driven me to distraction by doing precisely what they were wired to do: pause, investigate, evaluate, stare into the distance, sniff unsavory sundries, bark at imaginary flying monkeys, and mark territory down to their last drop.

In other words, I resisted the official dog walker’s mission. Where foxhound Sherlock is concerned, my mentor’s method would be out of the question. If a standard belt loop could withstand my spindly pal’s strength, my body could not. I’d return from our sojourns with a full-body brush burn.

I’m not kidding. When Sherlock spots a squirrel, he becomes a force of nature, hooping, straining and quivering. If I’m not paying attention, and he makes a break for something he means to catch, I could be in for a dislocated shoulder. But other than the slapstick potential of a man bouncing across the pavement behind a hound dog at full gallop, letting Sherlock stretch his legs and fill his ardent nostrils is a garden variety affair.

No, my problem—which the elder John had licked—is impatience. Sad to say, but I’ve always regarded walking the dog as a chore to be completed with dispatch. “All right, Sherlock,” the poor guy hears over and over, “let’s get going.” Then he feels the familiar yanking on his neck, just as he’s about to solve the mystery of a complicated scent.

It’s really not fair. This very moment, he’s curled up on the couch here with me in my writing hut. Unless I need to cross the backyard to the house, he’ll be content for four or five hours. His bladder is cast iron. The only sound out of him will be burbles and squeaks from his belly. He’s a good boy and deserves a couple times a day to be what he was created to be.

So why has it taken me decades to follow the lead of carefree John, who certainly had a brain in his head? Why does it take so long to learn patience?

Well, better late than never, as the cliché goes. Yesterday when Sherlock stopped to munch a thick blade of grass, I came to my senses. Instead of barking out, “All right, Sherlock,” I heard a whisper in my head: “Come on, John.” It was the gentle voice of a man who is coming of age. I’m not talking about when a boy becomes a young adult, but when a man on 60s heels begins to understand that with age comes at least a little wisdom.

Looking down at my dog bent over his roadside salad bar, I may have mumbled, “Hey, what’s the rush?” Or maybe I only thought it.

Either way, spending leisurely time walking Mr. Holmes will be a comfort to him and me both. And it sure feels good to have finally taken up John’s mantle. From now on, my dog and I will follow our neighborhood’s Yellow Brick Road. He can set the pace. MSN

John Coleman lives a short walk from Lake Erie and built a hut at the far corner of his backyard, where he writes as the family’s foxhound Sherlock Holmes snoozes. John hosts a blog called A Napper’s Companion. Be welcome to send comments and questions to [email protected].