Craters of the Moon: Exploring Earth and Sky 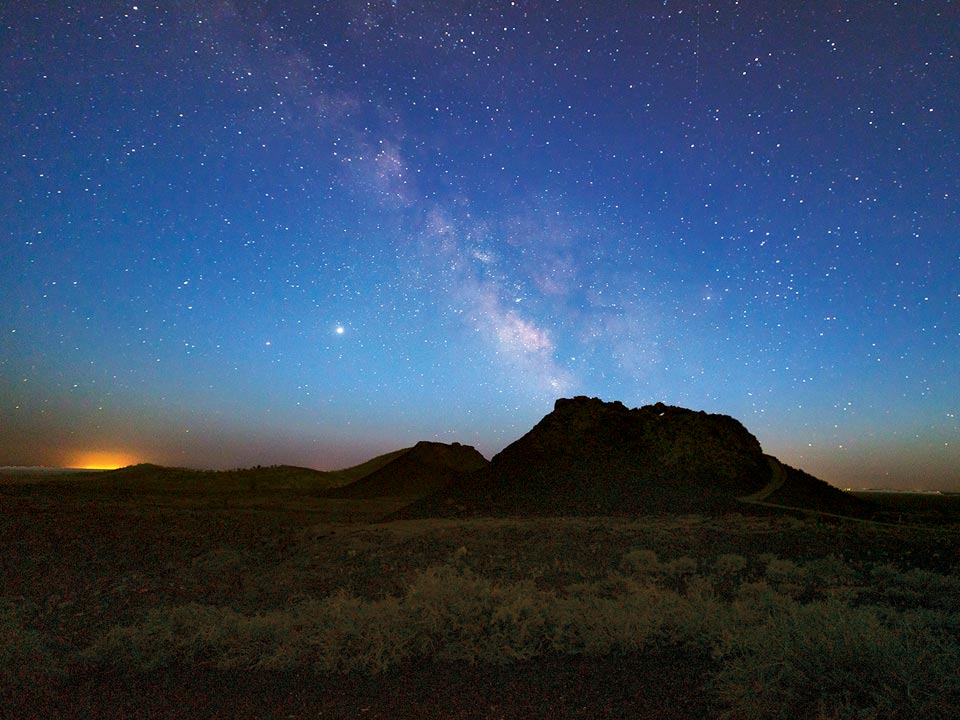 “The lava fields are the result of a tear in the Earth 50 miles long,” explains Ranger Greg Reed when describing Craters of the Moon. “Through this tear, magma from the mantle is rising and spilling across the Snake River Plain. Although it seems ancient to us, in geological time, it’s a very recent event.”

The last lava flow in the Craters of the Moon National Monument and Preserve, located in South Central Idaho, close to the town of Arco, ID, was approximately 2,000 years ago: a mere blink of the eye on our planet. Established in 1924, this unique landscape has helped NASA astronauts prepare for moon landings and continues to help them get ready for other space explorations as well. It is indeed, an other-worldly place to explore.

Scientists have documented eight major eruptions at Craters of the Moons with 60 substantial lava flows.

“These eruptions are not especially violent like Mount St. Helens, but they still bring molten lava to the surface of the Earth,” explains Reed.

According to Reed, volcanologists look for swarms of small earthquakes that register as quakes on monitoring equipment but aren’t felt on the surface. Although they can’t predict when the next eruption will occur, constant monitoring will give plenty of warning before lava reaches the surfaces and adds to the Monument.

“We’re in a quiet period between eruptions right now,” Reed explains, “but we fully expect more lava will flow at the surface again.”

A key feature of the Monument is the lava tubes—or caves as they are called. Lava tubes sit on top of the ground, so even though you walk down into them, they are not true caves. Visitors can explore five tubes. By taking the 1.6- mile Caves Trail, you can reach four of them: Indian Tunnel, Dewdrop Cave, Beauty Cave, and Boy Scout Cave.

Each of the tubes is rated for difficulty, so be sure to ask a Ranger which might be most suitable for you.

If you’ve never walked in a lava tube before, Reed says Indian Tunnel, which is about a one-mile walk from the trailhead, has 40-foot ceilings, is about two hundred yards long, and is rated easy. Rangers also lead daily hikes into the caves, so stop at the Visitor Center to get the schedule.

According to Reed, if time is limited, visitors should be sure to climb Inferno Cone, a cinder cone with 200 feet of elevation gain that can be walked in about three minutes.

“On a clear day, you can see for a hundred miles in every direction,” he says. “The vistas here are really amazing.”

But it’s not just the black, jagged lava flow punctuated with cinder and spatter cones and lava tubes that draw visitors here, it’s also the chance to experience an International Dark Sky Park.

“This is one of the best places in the West to view the night sky,” says Reed. “So many people live in cities now, that viewing the night sky without ambient light is thrilling.”

The Monument has Astro-rangers on staff to help visitors understand and explore the night sky.

“We have an outdoor amphitheater where we give night talks,” Reed explains. “At the end of the presentation, we set up large telescopes for visitors to use.”

“There’s a feeling of awe, wonder and mystery that comes over visitors. They get to look up and see the sky like people did hundreds of years ago,” he says. “Some visitors have never really seen the Milky Way before, and it’s a terrific experience for them. For most of humanity’s history we’ve been looking up to the sky. The night sky is part of our culture, stories and myths.”

Craters of the Moon National Monument and Preserve is open every day and there’s something special happening each season. According to Reed, mid-June is the time to visit for wildflowers. Seeing native plants growing in the black lava fields is super cool. Summer is a great time for hiking-but bring plenty of water to enjoy this very arid climate.

Fall brings crisp days with gorgeous blue skies making it perfect for more hiking. In late fall and early spring, Reed says visitors can see migrating animals like bear, moose, mule deer, and pronghorn as they move to and from the Pioneer Mountains nearby.

He says it’s the dual connection to what’s happening beneath our feet with lava flowing from the core of our planet and the mystery of the night sky that makes Craters of the Moon National Monument such a unique experience.

“When we contemplate the night sky as we stand on a lava flow, it truly brings a sense of the mysterious.” MSN