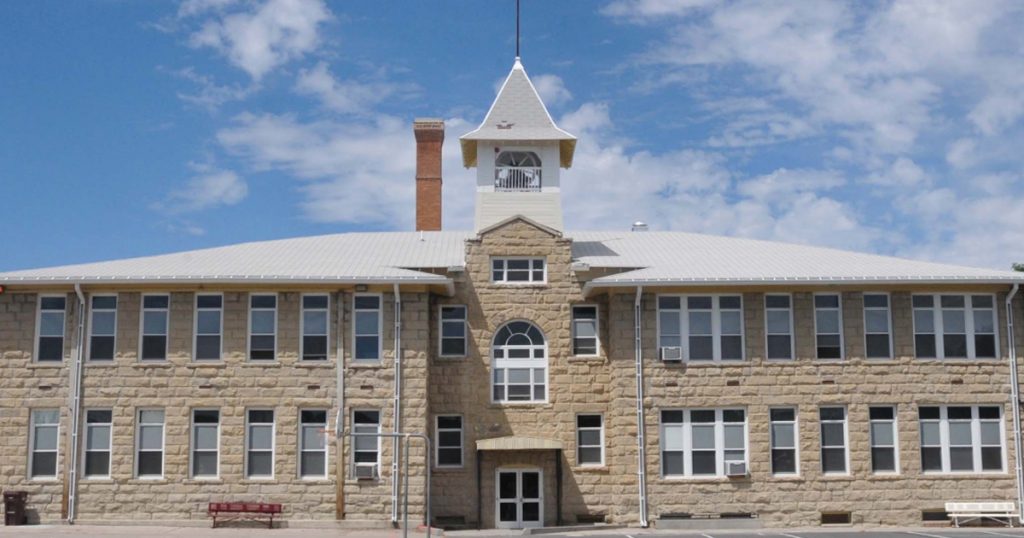 In Montana old buildings are a part of the state’s history. If we take care of our important old buildings instead of demolishing them, we can pass them down to our children and grandchildren as one way to pass on our heritage.

The beautiful Central School in Roundup, Mont., is an example of a building that should be kept and repurposed.

The Central School was built of nearby quarried sandstone in two phases. In 1911, the first phase consisted of nine rooms, considered now as the west wing. By 1913 the number of children enrolled grew, and the east wing was built. It was a building for which the community was proud.

Brick additions were added in 1962 and 1974. These additions are now being used for a Senior Citizens’ lunchroom, the Food Bank, and a thrift store, but the core school house stands empty.

When the bond was passed to build a new school in 2014, the school board gave the community three years to formulate a plan for the building, which is on the National Historic Register, or it would be demolished. A group organized to save the building by creating a new purpose for it was organized.

This is the type of building that Architect Randy Hafer of High Plains Architects in Billings gets excited about. As he has developed his thinking during his career, he has found himself standing for an architecture that should improve the world.

“I believe that there are many ways to protect our planet from human wear and tear and to improve it for future generations,” he said.

In 2008 when his company was growing out of its office, Hafer bought and repurposed a former saloon built in 1893. By using natural air flow to ventilate the building, insulation for more energy efficiency, rainwater collected from the roof and filtered in the basement for the water system, and natural light that called for infrequent artificial lighting usage, Hafer proved to himself that these strategies to decrease their footprint on the environment could work.

The building received The Leadership in Energy and Environmental Design (LEED) Platinum certification from the U.S. Green Building Council in June 2009.

Hafer has completed 12 LEED Platinum buildings, 10 certified historic tax credits projects, and he has been the recipient of numerous green building and historic restoration awards.

As he has repurposed old buildings, Hafer has been successful with using “green” concepts and knows they will be useful with future sustainable projects like the Central School.

As the developer of the Central School Project, Hafer has formed a Limited Partnership (LP) and is selling 25 shares at $25,000 each. He plans to remodel Central School into two types of uses: apartments on the two upper floors and neighborhood commercial spaces on the lower two floors. Market research has shown that there is a need for both.

The building exterior will retain its historic appearance, while the interior will be remodeled and become energy efficient with solar power providing much of the electricity necessary for occupants in the building. Hafer estimates the total cost of this project will be around $2.4 million.

When the plan called for people directly involved to invest beyond most individuals’ investment resources, an informal citizen committee in Roundup, with the assistance of the Snowy Mountain Development Authority and the Montana Cooperative Development Center, started putting together a rural investment cooperative association, the first in Montana.

An investment co-op can be a tool to help rural communities combine their resources to save important heritage buildings, among other purposes, while building an economic base. Since the investment in this instance is $1000 per common or preferred share, more people of modest means can invest in the Central School project.

In July a steering committee was appointed, and the co-op proposal was on its way to fruition.

Naming the initiative the Musselshell Rural Investment Cooperative, the steering committee is thinking beyond the Central School to other projects up and down the Musselshell River. In this case, the cooperative will invest with the developer in $25,000 increments.

Enough subscribers have stepped forward, so the co-op can buy one and possibly two shares and will elect a board of directors, vote on the bylaws, and vote on which projects to invest in.

A business or organization incorporated under Montana’s corporate statutes can join a cooperative as a member-owner. Shareholders may have addresses outside of Montana as well as within the state. In this way, a larger pool of resources and participants may assist in rural development with assets that are key to community and economic revitalization.

Although annual returns to members on the co-op’s investment would be modest — not exceeding the 6-percent threshold established by Montana law, the benefits to the community would exceed any monetary gain. In addition, the apartments and office suites that will become available will meet the needs of a variety of businesses and individuals in that part of Montana.

To learn more about investing in or the progress of the Musselshell Rural Investment Cooperative, call Wendy Beye at 406-320-2732. To learn more about investing with the developer, call Randy Hafer at 406-896-0250. Investing in projects like the future of the Roundup Central School will help rural towns continue to grow and thrive while retaining concrete evidence of Montana’s heritage. MSN